A wolf is always hungry

A wolf is always hungry

The wolf is uniquely adapted to its natural environment. A very social animal with its own ‘language’, this hunter is also a ruthless killer and is considered by many as ‘devil’s brood’. Famous western fairytales are colorfully woven into this animal. These master hunters are individually very different in intelligence and temperament, which determines their place in the social fabric of the pack. The wolf is definitely not a lap dog, let that be clear. Even though he is shy, because it has been hunted for centuries. In case of too small a territory and hunger, that shyness will quickly give way to brutality and it is indeed dangerous. In remote regions of Russia and Alaska, ranchers are the first to notice when the wolf becomes intrusive. There is often a lack of prey in combination with a surplus of packs of strong alpha animals in a hunting area that tends to keep shrinking.

The wolf ?? a teacher in the hunt

Canis lupus, or the wolf, belongs to the canids (Canidae) and is a predator (Carnivorae) pur sang with many subspecies. For example, it is also related to the fox. In groups, this rover is one of the most effective and efficient hunters on the planet. As a group, wolves are highly intelligent. Collaboration is one of the social pillars. He attacks sheep and in America he can even conquer adult moose bulls and grizzly bears when the opportunity arises and the need is urgent. In short, wolves are not afraid of anything or anyone. When it comes down to it, not for humans, although they appear shy. 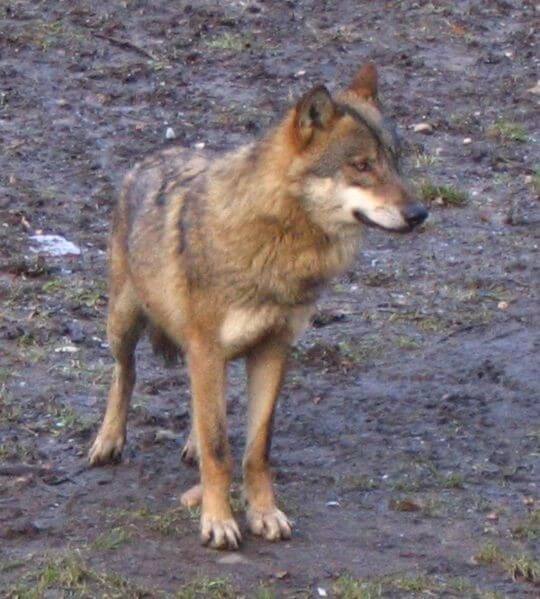 Adolph Murie was one of the first to examine the wolf and its behavior. His work The Wolves of Mount McKinley (1944), a mountain in Alaska, is for biologists still a standard and reference work. Indians, the Inuit, and other peoples around the world who have had to or should have their share of hunting know that they have a formidable competitor to the wolf and that a pack always reacts differently than the “science” of the field biologists dictates. In other words, the wolf often does not do what one would expect of him in the hunt. This is partly due to individual differences in temperament and intelligence. The mentioned peoples had such a large respect for the animal that, for example, the Nuniamut hunted caribou in the same way as the wolf. They regarded the wolf as their ultimate teacher, which was not to be trifled with. This respectful attitude also showed the Canadian Indians, such as the Cree people.

An adult wolf needs about 5 kilos of meat per day. In a pack of roughly 10 animals, not including the young, the total requirement varies from 50 to 100 kilos of meat per day. A normal pack consists of five to fifteen wolves. To get their daily serving, they have one territory from an average of more than 200 square kilometers to 1000 square kilometers, depending on the amount and type of prey that is roaming around. Wolves are very social among themselves.

Wolves don’t just hunt weak animals, but often chase healthy specimens. And they sometimes kill each other for often still obscure reasons, although perhaps not out of killer desire but because the wolf who has to believe it has a disease among its members. Wolves also sometimes kill more prey than they need for their food, such as sheep. If they have to, they do not shy away from humans. Certainly not in need and when the pack is led by a strong one alpha wolf. But the wolf’s mistrust and caution is and will remain proverbial.

The wolf has always invoked the imagination in a negative sense. Like a projection of the devil in man. This was true in Europe, but especially also in North America, where the colonists the native Americans and wolves braced and compared. Perhaps because the ‘red skins’ on the edges of the forest, on the ridges and later along the fields and meadows are just as silent at the advancing invaders ?? the settlers ?? could stare when the wolves did.

The pack or ‘wolf pack’

Wolves live in a pack or ‘pack’ with a strong partnership. A pack consists of five to fifteen wolves, usually led by one Alpha malealthough it can also be a she-wolf. They mark the boundaries of their territory with urine and feces. The wolf is dominant in its territory. Foxes and lynxes will displace or kill them if they become competitive in wolf habitat. The size of a pack strongly depends on the quantity and quality of the hunting area. The social order is very strict. The males and females have their own leader (star).

Wolf fins generally determine the nature of the hunting area and the appropriate locations for nest expansion. The alpha males and females only mate between each other. The rest of the pack consists in most cases of descendants of the pair. Every wolf in a pack is used for specialty. One wolf is a good hunter, another is an excellent hunter, keeps a better watch or is most effective if he is the first to attack during the hunt. The atmosphere in a pack is determined by the character of the pack members, ranging from peaceful to very aggressive. A wolf that attacks the authority in the pack becomes one outsider who is allowed to follow the wolf pack from a distance and only gets the leftovers after the pack has consumed most of its prey. 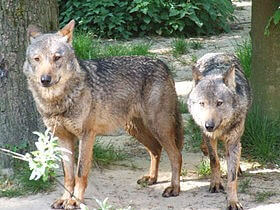 The wolf in all its subspecies is found all over the world. According to an estimate, there are barely 20,000 wolves left in Europe (including the Russian part). These are descendants of wolves who have survived the ‘mass murder’ in the past. There are wolves coming from Poland cross the German and Dutch borders and invade French regions from Italy and form packs, such as in the Mercantour National Park, and in the Netherlands the Veluwe, Noord-Brabant and Drente. Since the beginning of this millennium, wolves have regularly been spotted in the Netherlands and they have formed packs.

The hunger of the wolf is proverbial. Sometimes they don’t eat for three days, after which, after a successful hunt, they stuff themselves with 10 to 15 kilos of meat. They hunt practically everything that has legs, from roe deer to rabbits and birds, but they are also not averse to carrion and waste when there is no other choice. It is known that the wolf also hunts healthy animals. Great ungulates usually kill them by walking past it, trapping the prey and then biting the hip muscles, thus slowing the animal’s speed. This is followed by a battle of attrition in which they bite into the mouth and flanks of the prey animal. The fight with the prey can be over in an hour or become a day-long, grueling torture for the prey. The wolf is a long-distance runner and does not seem to experience fatigue. The wolf is not strange to play. Not just among each other. They also like to romp with ravens and crows, and play behavior has even been observed between wolves and a moose, with the ungulate that strangely enough not having to pay for death, even though its odds were all that time nil.

The ungulate is the wolf’s favorite prey, depending on whether it is sufficiently available in its territory. In times of scarcity they even attack the fish in the river. Their stamina and teamwork are phenomenal. Characteristic of the wolf is its howl, which sounds terrifying to many. The howl of wolves is a means of communication or “language” of the pack (eg where is everyone?). The more intense the social bond, the more passionate and violent the crying. Depending on the weather, the sound carries over distances of more than ten kilometers. They also cry to warn descendants who ‘live’ far away of danger. Or to quickly collect the pack. Other characteristics of the wolf (Canis lupus lupus) to be: 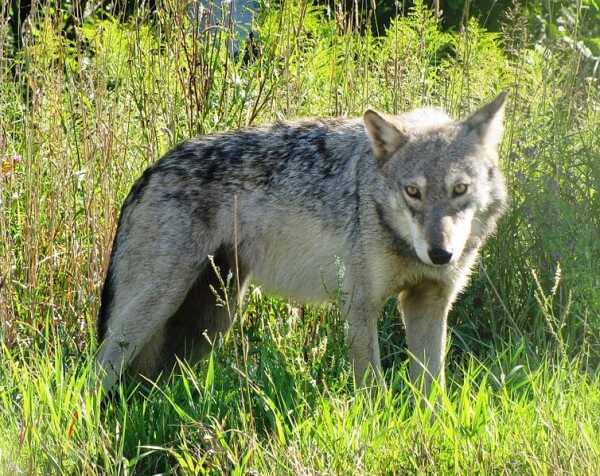 Is the wolf dangerous to humans?

The wolf as a sneaky sneak, as often represented in Western fairy tales, is totally foreign to the Indians and Eskimos. In medieval Europe, the wolf was seen as a disguise of Satan, the devil’s projection into man. Jesus as the keeper of the flock, with the wolf symbolically in the background, has not done any good to the image of this hunter over the centuries. The individual wolf is by definition shy. But the bigger the pack, the more guts the wolf shows. Especially if the alpha animals are strong characters with good ones leadership skills. Then the larger prey animals are also attacked.

The early Indians of North America had great respect for the wolf. They knew better than anyone how dangerous the wolf could be. Those who hunted in the territory of a strong, aggressive pack often couldn’t tell. Wolves’ response to humans depends on past experiences. Wolves that have not had negative experiences with humans show little fear. In any case, if the paks are small, people will not be bothered by them and will hardly even see them. Except in times of scarcity. Then they can get pushy, to say the least. The wolf loses its fear of humans through habituation, especially if it is not hunted. The risk increases later if the wolf has ever dared to attack or threaten the human in its territory without being sanctioned.

The wolf is a predator, a carnivore, however you turn or turn it. If there is no other option and the opportunity presents itself, in combination with a dynamic pack with strong alpha animals, humans will also be his prey. That man became afraid of the Wolf is not strange. Before the 20th century, wolf packs were a major risk, and in certain parts of the world this is still the case. And certainly not just by rabid wolves.

Over the centuries thousands of people have been killed by wolves. From France to Italy, Scandinavia, Russia and North America. Many children had to believe it. Since then, the wolf population greatly thinned, partly because it was hunted worldwide. Since the beginning of this millennium, dozens of cases of fatalities from wolves have been known, such as in Russia, Afghanistan, but also in Europe (Sweden), Canada and, last but not least, Alaska. Rabid wolves are the most dangerous in that regard, usually in the spring and late autumn.

Breeding cats, how do you do that?

Breeding cats, how do you do that?