Alte Mellum, or Mellum for short, is a small island in the Wadden Sea that lies between the outflow of the Jade and the Weser. It is also called the ‘paradise between Jade and Weser’, paradise for birds and seals that is to say, because there are no people living on Mellum. The island played a role in the Second World War and the remains of that piece of history can still be seen. You are not allowed to visit Mellum just like that, it is a protected nature reserve that can only be entered with a recognized guide and by scientists and bird watchers. 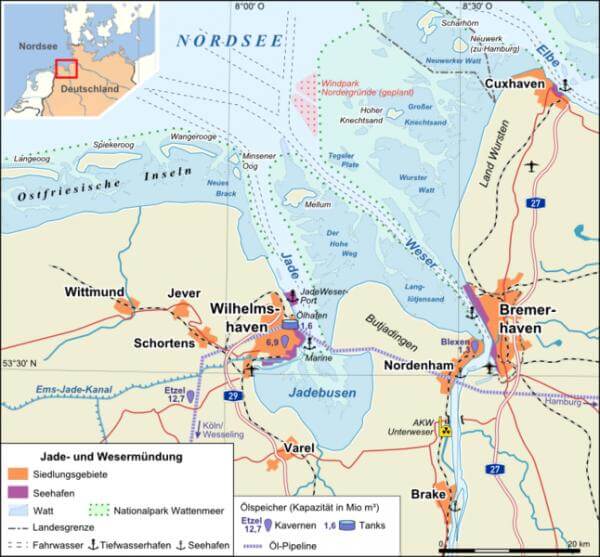 Paradise between Jade and Weser

Mellum, or Alte Mellum, is located in the Wadden Sea World Heritage Site in the mouth of the Jade and Weser. It is an island of about 750 hectares. It is one of the German Wadden Islands in the Wadden Sea. The islet is located southeast of Minsener Oldoog and Wangerooge and nine kilometers off the coast of the Horumersiel and Schillig on the mainland of Niedersachsen, Lower Saxony. Mellum is located north of the German Butjadingen peninsula. Mellum is often mentioned in the same breath as Hoher Knechtsand, which is six miles northeast.

Mellum does not belong to any municipality. Lower Saxony largely owns the island. A small piece of 4,522 m² has been built on since 1950 with a nature conservation building (Naturschutzstation Mellum) and that piece is part of the Oldenburger Landesverein für Geschichte, Natur- und Heimatkunde, the historic association of Oldenburg.

The classification of Mellum is controversial. It is said to belong to the East Frisian Islands, but is classified in the mudflats of the Elbe-Weser-Dreieck, Elbe-Weser-Triangle.

The island is not that old yet and was only created in the 19th century. Then it could arise from a beach ridge on the watershed between the mouths of the Jade and Weser in the Wadden Sea. Like all Wadden islands, Mellum is subject to changes as a result of sea currents and wind. The area, which mainly consists of dunes and salt marshes, becomes larger and then smaller again and changes shape. Southwest-northeast, the island measures approximately three kilometers. It is about 1.8 kilometers northwest-southeast.

The island was created from sediment from the tidal steam that flows through the Wadden Sea. That flood current flows there from the northwest. The sand that is carried along in the water formed a sandbank off the coast of Schillig. The surf pushed up the sand and thus formed a barrier that would become the beginning of the small island of Alte Mellum. On old maps it is referred to as Hochdünkirche. Drift sand formed dunes and plants settled in the sand. The interplay between vegetation and dune sand increased the sandbar. A salt marsh developed behind the shelter of the dunes.

In 1903, the overgrown salt marsh was seven hectares and in 2006 it measured about 750 hectares. The measures of the island in a century:

The remains of the bunker are still standing on the island and there are still concrete blocks from that time. They are the last traces of the time when one Flakbatterie was standing. Shortly after the Second World War, the British broke most of the bunkers. The area, the embanked polder, of the Flakbatterie is four hectares and hot Das Eingedeichte. From the ring dike a path runs in a southwesterly direction. There is also a memorial of the then stationed 312. Marine Festungspionier Battalions. 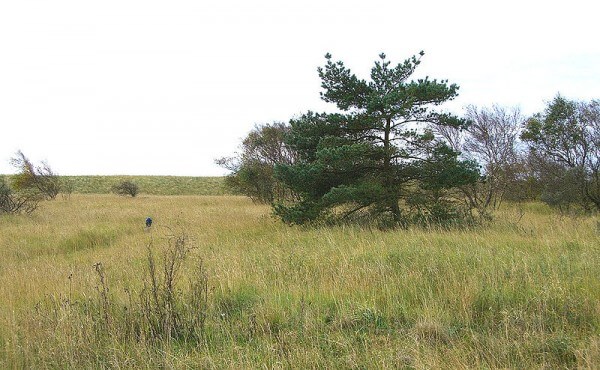 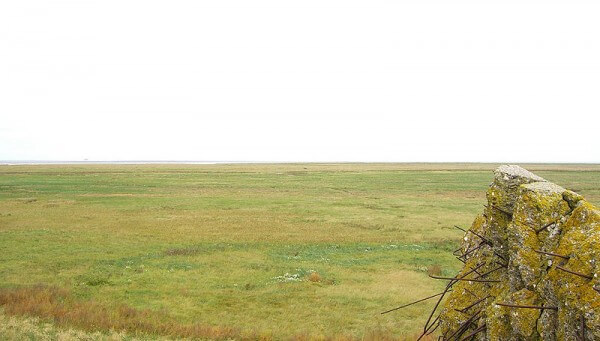 Today it is Mellum National Park, a German nature reserve. The island keeps changing and sandbanks appear and disappear. In winter, the island suffers from the storm surges that (partly) flood the island. The washed away sand raises the dunes elsewhere on the island, the silt moves and the salt marsh grows. The island has some deep arbors that grind into the salt marsh. Some are more than two meters deep.

The island is at the mercy of birds, seals and plants and is a protected area, where people are not allowed to come. More than 200 species of plants grow there, some of which ended up on the island through human intervention.

In 1946, typical garden herbs and vegetables were still found: onion, parsley, broad bean, pea and cabbage. Chives and salsify and daffodils still grow in the spring. They are remnants of human intervention in World War II.
Grasses and asters grow in the dunes and there are shrubs and trees such as hawthorn, sea buckthorn, apple and pine.

There are also mushrooms, 38 different species, including Red List species.

Mellum was initially mainly the island of the terns, but with the change of the vegetation, the bird population also changed. In the twenty-first century, Mellum is mainly the island of the gulls. About 10,000 pairs of herring gull breed, flanked by 400 breeding pairs oystercatchers. In total, 30 species of birds breed. In the fall and spring, hundreds of thousands of birds visit the island to rest and forage during their migration.
The birds that breed on Mellum are:

Mellum is also a resting area for seals. It is the main resting area for the seals in it National Park. In addition to these marine mammals, there are wood mice. During the Second World War, these were lifted to the island with the plant material that was used at the time for the ring dyke.

The entire island of Mellum and the surrounding sandbanks have been designated as a quiet area. There is strict protection and only with special permission one can visit the island. Excursions and mudflat walking tours are organized and the island is only accessible for recognized excursions and scientists. There is a birdwatcher’s enclosure on the island and conservationists live in the birdwatcher’s house from approximately March to October. There is a Mellumrat, Council for Mellum, which monitors protection and issues instructions.

The Mellumrat, Mellum Council, is a conservation association responsible for the island since 1925. The Council was set up by various nature conservation organizations. The Council supervises conservation and management and conducts research. The Mellumrat has stations at Mellum, Wangerooge, Minsener Oog and in other protected areas in the Wadden Sea Region of Lower Saxony.

In 2009 a fire broke out on Mellum and because there is no fire extinguishing water on the island, it took three days for the voluntary fire brigade from the mainland to get the fire under control. Ten hectares went up in flames, including nesting areas of the herring gull and tern colonies. It is estimated that some 2,000 young birds have been burned.

Buying a puppy, what should I pay attention to?

Buying a puppy, what should I pay attention to?