Ancient plum varieties with fruits the size of cherries

Ancient plum varieties with fruits the size of cherries

Small plums, the size of cherries with different names. From cherries, belzen, effies, duckweed to mirabelle plums in various regions of the Netherlands. The round, small plums vary from a yellow, red to blue color and belong to the species Prunus insititia (wild plum). The wild plum or duckweed plum is a subspecies of the Prunus (plum). The sweet-tasting, firm flesh of the duckweed plum is often used for processing into jam, jelly or plum wine.

The plum (Prunus domestica) originates from the Caucasus and Persia. The plum is planted in the Netherlands and Belgium and is rarely found wild. Prunus is derived from the Greek word ?? prounos ?? that means plum tree.

The plums at the greengrocer

The cultivated varieties that we buy in abundance in the late summer and early autumn from the greengrocer or in the supermarket or that we can harvest ourselves are: 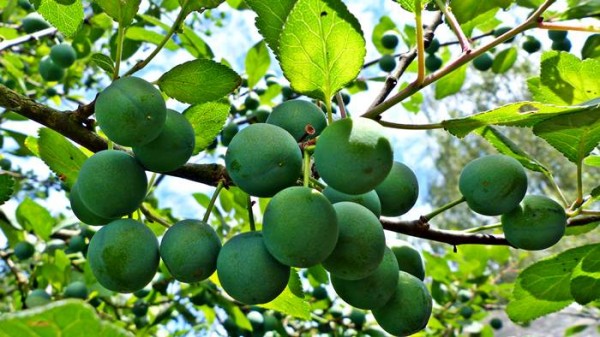 The duckweed tree or wild plum (Prunus insititia for short) is a tree with very small plums the size of a cherry. They are related to the Rosaceae (Rose family). The origin of the Prunus insititia or duckweed tree is not really known but it is believed that it originated from a cross between blackthorn and cherry plum. They are wild plums that have existed since the beginning of the era. During excavations in North Brabant, seeds of the fruit of the wild plum have been found in an old well. The tree may have been brought from Asia to Europe by the Celts (a collection of peoples who stayed in Europe in late prehistoric times / antiquity). Where after the Second World War almost every farm or large garden had a duckweed tree with its small purple, yellow or red plums (duckweed), almost all of them were cut down at the end of the last century. The trees are still for sale from fruit growers of old fruit varieties.

Duckweed trees are native to southern Europe and are widely planted in the Netherlands and Belgium and also here and there. This standard tree has an irregular shape and gives a large yield of small yellow, red or blue plums (if the blossom is not frozen in the spring). The tree has extensive, felt-like branches and fewer thorns than the blackthorn to no thorns. The duckweed tree prefers sun to partial shade, in moist soil. They are deciduous fruit trees where blossoms arrive in early spring before the leaves show themselves (naked bloomer). The leaf is oval in shape, four to ten centimeters long and has a serrated leaf margin. They are hairy on the underside, especially on the veins. The duckweed trees can reach a height of three to six meters and produce root shoots that can be replanted and give a new duckweed tree. 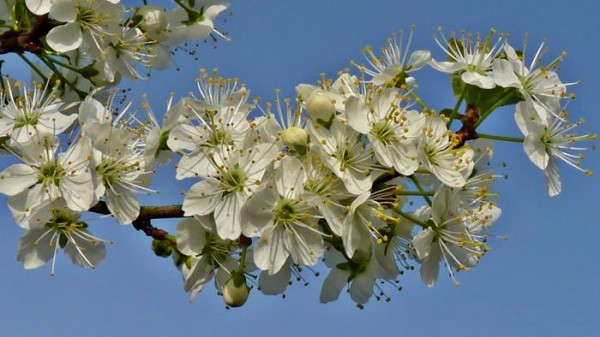 The flowers (blossom) consist of five petals and most Prunussen insititia have both male and female parts (hermaphrodite). They flower in clusters in April and are pollinated by insects.

The fruits with the colors yellow, red or blue are small drupes with a stone in it. The commonality of the different colors of fruits is the heart shape of the fruits. The round fruits have a shallow vertical seam. In August, the fruits have changed from green to blue, yellow or red fruits and are edible. The greenish flesh is quite juicy and easy to eat. The fruits are also widely used to make jam, juice and plum wine. Especially on the blue duckweed plum there is a matte, whitish coating when ripe on the fruit. The attack?? (or frost) is a natural protective layer to repel water, for example. The stem of the leaves is red to the leaf and hairy. The leaves are also slightly hairy on the underside, especially on the veins. It is a plum that bears well and can be harvested in late July, early August.

Names for the duckweed

The duckweed has its own name in different parts of the Netherlands. The blue, yellow or red fruits are called in 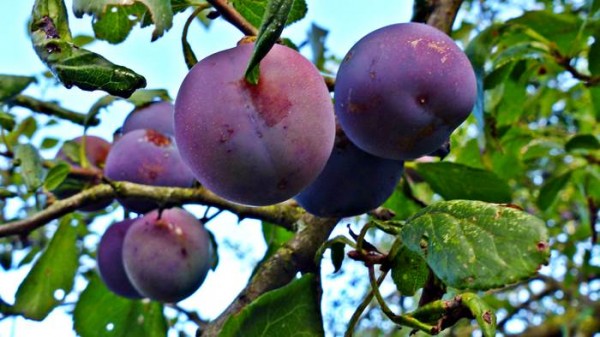 The duckweed or duckweed are in between plum and blackthorn in shape and fruit size. Crossings have presumably led to all kinds of breeds in the distant past. Varieties whose rootstock is used for the plum trees from which we now buy the plums from the greengrocer or pick from our own garden. These rootstocks of old trees are also used in the 21st century to restore the old varieties by grafting the old varieties of the past. Varieties such as:

The double farmer’s white is also called egg plum. The round and yellow fruit resembles the Reine Claude but is smaller and more yellow. As it ripens, a red color appears on the plum. The juicy fruit is sweet and the stone peels off easily. The word ‘farmers’ in the name is more common in old orchards and farmyards.

A small dark blue plum with a lot of frost. The fruit ripens at the end of July in early August with fairly juicy yellow-green flesh and a fairly loose stone. The hard and tart skin means that the fruit has a moderate taste.

Elongated, blue plums that taper and can be harvested in September. The yellow flesh is firm, spicy, sweet (can also be sour) and quite dry. Wounds can be eaten fresh, but they are mainly used in cooking. For jam, pie, preserving in juice and for baking in pancake batter.

The first find dates back to 1860 in France and is believed to be a seedling of the Reine Claude Verte. The round fruit is golden in color and the harvest time is the second half of August. The pulp is difficult to detach from the stone.

Mirabelle de Metz or also called yellow mirabelle, small yellow mirabelle or orange plum, is an ancient species, the first of which was found in the vicinity of Metz (France). The small, slightly oval fruit changes with age, from green to golden yellow with red spots. The ripe fruit is slightly frosted and has a sweet taste. The fruits are harvested in August and the tree is not self-pollinating. The Mirabelle de Metz is easily confused with the Reine Claude d’Oullins.

Mirabelle de Nancy is an old breed of unknown origin. The Mirabel de Nancy is common in the area of ​​Nancy (France) and owes its name to it. The fruits are small golden yellow fruits with a blush and firm and aromatic flesh. The plum is suitable as a hand plum and for processing into, for example, jam. The picking time is August.

The difference between the pepper nut and the spice nut

A healthy dog ​​in the cold and on winter sports

A healthy dog ​​in the cold and on winter sports