Biltong is the name of a South African delicacy. Biltong is made from dried strips of meat. The delicacy is mainly produced and consumed in South Africa, but also in other countries where Afrikaners have taken up residence over time ?? such as Australia, UK and Netherlands ?? the biltong is nowadays increasingly self-produced. Here is also a recipe to make biltong yourself! 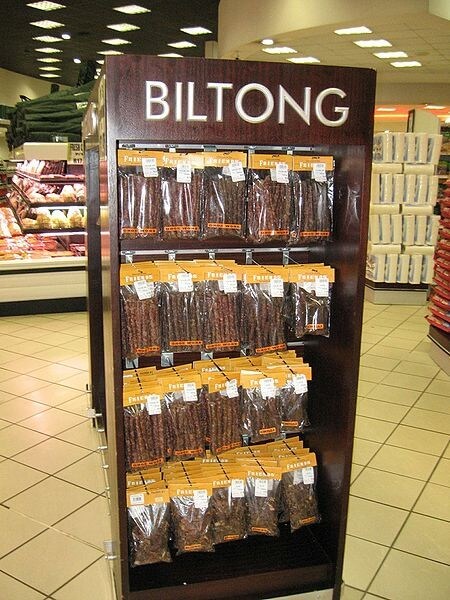 The recipe for the dried strips of meat was brought back from the “old world” by the Dutch who arrived in the Cape. It was very important that food could be kept (preserved) for a longer period of time. It took too long to build up herds. In addition, hunting African game took too much time, and moreover, the large quantities of meat that remained of it had to be preserved, while there were no refrigerators and freezers at that time. The meat used for drying is mainly beef, kudu or ostrich meat. However, the delicacy is also made from donkey meat.

‘Bil’ indicates which part of the animal has been used for it and tongue represents the shape; strip or strip. Biltong is made from different types of meat. The most commonly used are beef, cow meat and ostrich meat. The meat is cut into strips about a centimeter thick. Then it is put in coarse salt; the longer in the salt, the saltier the taste. The excess salt is removed and the strips of meat are passed through vinegar with some Worcestershire sauce. Then it is passed through a traditional spice mixture. The bars are then hung in the open air in a cardboard box or drying cabinet, after which the drying time varies. In the Netherlands, the meat is often hung to dry in a convection oven, because the climate is too humid to dry outside. The longer the biltong is kept, the harder and drier it becomes; all the more like the biltong you can buy in South Africa.

For those who feel like taking on the challenge of preparing the dried meat themselves, here’s a recipe!

When preparing biltong, it is best to use some chopsticks or a string to hang the pieces of meat.

possibly add a little garlic or other herbs to your liking and taste.

Cut the meat into slices of about 2 to 3 centimeters thick and put them in a bowl. Also add the vinegar, coriander, salt and pepper and any other spices to the slices in the bowl. To add extra flavor to the meat, you can add some garlic in the km. Mix all ingredients well and put the bowl in the fridge for a while – about five or six hours – so that the spice mixture with the vinegar absorbs well into the meat. The mixture must be stirred through the meat regularly again, so that the marinade is well absorbed into the meat.

When the marinade is well absorbed into the meat, the pieces of meat should be pinned to the cord or the sticks. They should be left to dry in a cool, dry and well-ventilated place. When the meat is sufficiently dried, it can be cut into small pieces, strips or long strings.

Because it takes six days for the meat to be dried in the above way, you can also dry the meat in a faster way. You achieve this by hanging the pieces of meat on the grid in the oven. The cloths must then hang in a preheated oven at 50 degrees (convection oven) for 2.5 hours. Make sure that the oven door remains ajar, for example by clamping something in between. Otherwise the meat will not dry properly.