In addition to Norway spruce and Serbian spruce, the blue spruce from North America is one of the best known spruce species, not least because this tree is often used as a Christmas tree. The gray-blue spruce can reach a height of 35 meters, because this tree is monoecious, a single tree can form new cones with seeds every year. This tree is too big for a small garden, but there are dwarf varieties that can reach a maximum height of three meters.

Distribution of the blue spruce

The blue spruce is native to western North America, where the tree grows high in the mountains (Rocky Mountains) along moist river banks. The blue spruce was brought to Europe for wood production and planted mainly in Central and Northern Europe, the tree is also established as an ornamental tree, a well-known cultivar is the ?? Glauca ??. At the end of December, the blue spruce is often sold as a Christmas tree, because of the horizontal, well-arranged branches it is very suitable for adding decoration. Taxonomically, the blue spruce belongs to the genus of spruces (Picea), to the family of pines (Pinacea) and to the order of conifers (Coniferae). This order consists of over 600 species, including cypress, pine, spruce, silver fir, larch, trees of life, and also juniper.

Like many other spruces, the blue spruce grows straight up, the characteristic feature of the blue spruce are the horizontally protruding branches and gray-blue to gray-green color. The tree can reach a height of 25 to 35 meters, in the first ten years about three meters. The needles are about 2 to 3 centimeters long and blue to gray-green in color, both on the underside and top. In addition, the needles are pointed and slightly stabbing. The top and bottom of the needles form a flattened diamond in cross section, so it is also called four sides of the needle instead of two sides.

The stomata (the cells through which oxygen, carbon dioxide and water vapor can be absorbed and released) are present on both sides of the needle, and with this you can clearly see the difference with the Serbian fir, which only has stomata at the bottom. The needles can live for four to eight years. Because the tree is a Picea, the needles are attached to the twig with a piece of leaf pad of approximately 1 mm, it is worthwhile to view these kinds of details under a magnifying glass if you have a magnifying glass, only then does it become clear how sturdy a needle is attached to a twig, also the “wonderful world” of the stomata becomes clearly visible. The bark of the blue spruce is dark purplish brown with rough scales, but the twigs or shoots are more yellowish brown in color. Spruces, including the blue spruce, usually grow once a year, in the spring the buds start to sprout and the first new tips become visible, these are the new upcoming branches, which make the tree a bit fresher in spring and summer. radiance. 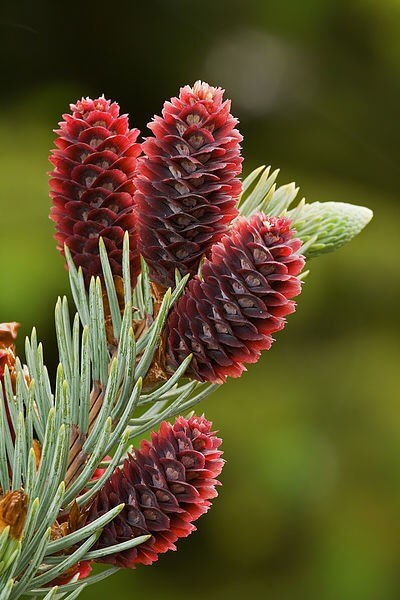 Because the blue spruce like all other ?? Piceas ?? monoecious, male and female cones are formed. The female reddish cones will grow to six to ten (sometimes twelve) centimeters hanging cones after fertilization, a big difference from the Serbian spruce which only forms up to six centimeters in size. Sometimes referred to as female or male flowers, this is formally incorrect because the cones of spruce do not have a pistil and ovary and therefore do not form flowers. The cones are broadly cylindrical in shape and hang down. The cone scales have a bitten edge (quote from Heukels ?? Flora van Nederland), in other words: they end in a frayed blunt point. In the cones the seeds are ?? naked ?? present, a blue spruce and all other conifers belong to the clade of gymnosperms.

Planting in your own garden

With a height of up to 35 meters, the blue spruce is in many cases too large for an ordinary garden, but there are also cultivars that will not grow too quickly. For example, the Picea pungens ‘Glauca globosa’, which grows to one to two meters in height and only after ten years, or the Picea pungens ‘Blue Diamond’ which is only three meters after 25 years. The Picea pungens ‘Blaukissen’ even grows to only 70 cm, a real dwarf fir. In the more spacious gardens it can be very nice to plant a normal large spruce, the evergreen tree will not be a nuisance from leaf litter. People with a small garden can also choose to grow a common blue spruce to a height of, say, seven meters, and then remove the tree or cut the lower branches. The intermediate form Picea pungens ‘Koster’ is also a good option, it reaches a maximum height of 8 meters. The best place to plant a large blue spruce in your own garden is centrally in the middle, or at least well away from the boundary.

Spruce varieties do not require maintenance, but the side branches can be shortened a little to maintain a symmetrical shape. The best time to prune a blue spruce is from November, when the sap flows have been minimized as a result of the winter. It is best to cut off entire branches up to the trunk to create a smooth wound (if necessary rub with wound balm). A dwarf spruce does of course require no maintenance, because it remains small.