In Be invisible you will be drawn into the world of Metin. Metin moves with his parents and sister from Germany to the Bijlmermeer in the early eighties. He is bullied at school and even at home it is not safe with an abusive father so the family becomes adept at making themselves invisible so as not to incur his anger. The Bijlmer changes and the family members learn to fight their father and husband.

The first part describes Metin’s arrival in the Netherlands up to and including the summer holidays prior to secondary school.
The novel begins in the Bijlmer when the main character Metin is a five-year-old boy and is forced to move to the Netherlands because the political asylum application in Germany has been rejected. His father has no job, the family has to make ends meet. Father calls himself a communist, which he thinks is sufficient reason to relieve himself of all responsibilities. In his own words, he has greater ideals than slavishly earning money in the service of the capitalist system that he hates so much that exploits and squeezes the proletariat. He feels superior to his environment and reads political charters and Russian literature. He is not a father to the family, every day he flees family life to talk politics, drink and gamble with others, yet he is convinced that he is a great father.

Metin’s father is not interested in his family, he thinks it is his wife’s job to take care of the education of his children. Everything his father finds more interesting than his wife and children. When he is at home he wants all the attention and argues. He is overly interested in his appearance, spending a lot of time combing and blow drying his hair. When he gets angry, he can’t control himself and becomes violent, especially after drinking. The family members deal with this in their own way and have learned to make themselves invisible. Only with old and new does Metin’s father transform into the ideal father figure.

Because a lot of money is spent on drinking and gambling, Metin’s mother has too little money to go shopping and has to knock on the door of her husband every time. The relationship between his parents is not good, his father humiliates his mother and calls her “bird brain”. When Metin’s mother decides to work, she gets a job at the PTT, she also has to do the housework and cook for the family. Her husband does nothing.

When Metin’s parents decide to separate, his father moves to an apartment in Amsterdam-West and the atmosphere in the house becomes much better. But after six months he returns, as it turns out later because he has debts and can no longer pay the rent for his house.

Metin befriends Floyd and Saleem and takes an interest in girls. At school, Metin starts with a language deficiency, but because he becomes a member of the library on the advice of his school teacher, he has cleared that backlog in no time. In addition, he reads piles of comic books that he buys at the market. Metin, on the other hand, finds arithmetic difficult, he receives tutoring from Mr. Rolf.

The second part runs from the first class up to and including the exam class of the VWO. Metin goes to pre-university education, where he has problems with mathematics. He is the only student from the Bijlmer and is called “cleaner” by fellow student Dino. Dino is supreme in the classroom and makes life difficult for Metin. Most of the other students in the class also tease him, an exception to this is Danny who stands up for Metin. Out of self-protection, Metin also makes herself as invisible as possible at school. It becomes extra difficult for Metin when his friend Floyd moves to Almere. But one day a new boy comes into class, Kaya, he becomes a good friend of Metin and protects him from Dino who nearly stabs Metin to death in a fight. Dino is then arrested and the atmosphere in the classroom improves. 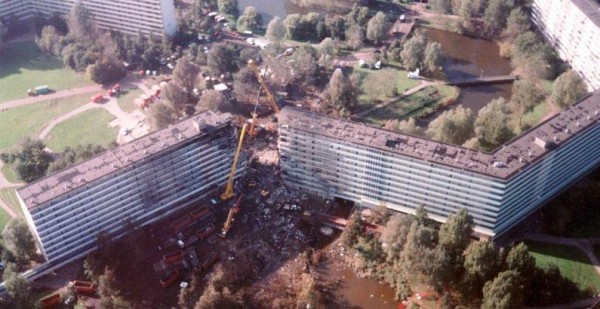 Metin’s parents have a small shop on the black market in Beverwijk where they can be found on weekends, his mother even started working one day less for the PTT, but the shop is not a success. His parents soon put an end to it. Their next project is selling kebabs on Queen’s Day where the family earns a lot of money in a short time. For a moment they seem like a close family.

One day his father starts studying as a social worker, he thinks he is very suitable for it because then he can “tell people what to do”. In October 1992, the Bijlmermeer changes forever, a Boeing 747 crashes into the Kruitberg flat, killing dozens of people.

Part three covers the period from just before the high school exam to the second year of Metin’s law degree in San Francisco. Metin goes to work at the Vomar as a cashier, his mother wants him to save, but his friend Kaya asks him on a world trip. He does not dare to tell this at home because his parents want him to go to university after VWO. In the meantime, his sister has started studying medicine, there is more and more vacancy in the Bijlmer and the nuisance from junkies and homeless people is increasing.

Metin passes his final exam with a meager four for math, but the other numbers make it enough to pass him. Eventually the family moves, Metin goes to law school and after his studies at the university of applied sciences his father finds a job as a social worker, he occasionally cooks or does the washing up. His mother is also doing well, she is promoted at the AMC where she has since started working.

Metin gets a girlfriend and his father’s contract is not renewed. From that moment on, he has a WAO benefit and is no longer performing anything. The quarrels at home are also returning. Nevertheless, something has changed, Metin’s mother is less likely to be intimidated and argues with his father. This has largely to do with her work at the AMC, but Metin and his sister are no longer silent either. One bad day he assaults his wife after which he is no longer welcome at home. Metin’s parents split up and his father moves to Izmir.

The book ends with Metin returning to the Fleerde flat where he lived with his parents and sister. The thoroughly renovated building still stands, but most of its old neighborhood has been unrecognizable.

The main characters are Metin, his father Harun, his mother Asena and his sister Nevra. His friends Floyd and Saleem are important to Metin when he is in elementary school. Metin is interested in girls like Esmeralda and Nicole whom he does not dare to approach very well and later his girlfriend Sanne with whom he sleeps for the first time. In secondary education, Kaya plays an important role by taking on Nemesis Dino for Metin.

Elements that keep coming back in the book:

Metin, his mother and sister become adept at not resisting their father and husband and always taking him into account: “We learned to stare at the ground and wander like inconspicuous ghosts through the house, on the way to outer space. that was assigned to us. We learned to collect and swallow. “

The theme of the book is survival in a hostile environment, at home, at school and in the Bijlmer itself. This runs like a thread through the entire book.

The novel begins in the eighties when the young Metin is five years old and covers a period of about fifteen years. The story itself is not told chronologically. He is the main character and narrator of the story. Metin grew up in the Bijlmermeer in the eighties.

Despite the thickness of the book, the novel reads smoothly. Immediately after reading the first sentence: “When the first jumpers crashed out of our flat, my father started his nightly pleasure trips through Amsterdam,” you are, as it were, sucked into the book. Although heavy things happen in the book, it never gets heavy, things are described lightly and sometimes with the necessary humor: “He endlessly worked on the hairstyle that not only had to gain admiration from everyone who gave him a chance look outside the door , but also had to be strong enough to withstand multiple hurricanes. “

Murat Isik was born on September 11, 1977 in Izmir, Turkey. Isik is a Dutch writer of Zaza-Turkish descent. He is a lawyer and studied law at the Universities of Amsterdam and San Francisco. Unlike the majority of the Turkish population who are Sunni Muslims, he belongs to an ethnic minority called the Zaza. Most of the Zaza Turks adhere to Alevism, a form of religious humanism.

His first novel ‘Verloren Grond’ received the Bronzen Uil Audience Award in 2012. Be invisible was awarded the Dutch Book Trade Prize 2018 and the Libris Literature Prize 2018. In 2019 the Boekenweekessay came from Isik.