Concept M by Aafke Romeijn is about a young woman with colorlessness, a disease for which no cure has yet been discovered. There is one government party, the Middle Party of Stork and one health insurer, the Health Insurance Bank. Over time, problems arise with the extraction and production of the necessary raw materials for the drug dye in the Middle East. Prime Minister Stork is accused of a conflict of interest, he is co-owner of a medical device company and appears to have doubled government funding for medical inventions.

The book starts on a beautiful day in May 2020, main character Hava Gerritsen is on her way to a press conference in her car. She is different from others, her skin, hair and nails are colorless. Gerritsen is not the only one without color and nobody knows exactly how colorlessness came about. The disease is thought to have been caused by a vitamin supplement prescribed en masse by general practitioners to pregnant women in the 1950s and 1960s.

Hava studies German Studies in Utrecht, at the same university where her father Gerbrand teaches German Studies. She could have done that in her hometown Nijmegen, but she wants to stand on her own two feet. She has a somewhat difficult mother-daughter relationship with her mother Marijke, Marijke writes articles for news magazines and stands up for the interests of the colorless. Her daughter wants people to think about the exceptional position of the colorless.

Colorless babies are not only born in the Netherlands, but also in neighboring countries. In the beginning, the babies died soon after birth, later medicines were introduced that allowed the children to live longer, but still die at the age of eight. It was not until the mid-1960s that a treatment method was introduced that would allow colorless people to live longer and even reach the age of fifty. The treatment consists of administering a cocktail of drugs which makes the disease more bearable. For this, each colorless has a box between the shoulder blades in which a dye ampoule can be attached. The cocktail is called a dye, but patients remain pale with almost black eyes and white hair. In addition, dye has unpleasant side effects such as suppressing the development of the lungs so that colorless people have no endurance. Colorless people can also absorb poor calcium, so that they break their bones more quickly and often have dental problems. Another characteristic is that colorless people quickly get cold

During the car ride, Hava listens to the radio with reports about Prime Minister Stork. Stork is accused of a conflict of interest, he co-owns a medical device company and appears to have doubled government funding for medical inventions. The Middle Party of Stork has been in power for twenty years and there is one health insurer, the Zorgverzekeringsbank. Problems gradually arise with the extraction and production of the raw materials for dye in the Middle East. A shaky balance that is disturbed for the slightest thing.

Hava has befriended a group of radical students who want people to think about a solution to colorlessness. This is not only about the drugs themselves, but also about the influence of the colorless on politics and the media. “A dictatorship of the weakest,” critics call it. Colorless people cost society a lot of money, but talking negatively about it is not done, the so-called humanity, however, threatens to become the downfall of society. The costs are soaring and the government can hardly cough up the rising costs.

Gerritsen and the other students unite in Ufo, a resistance movement together with Elf, Tilman, Atte and Broer, together they commit attacks on the dye industry, such as on Alpha Pharmaceuticals. Ufo had actually existed for much longer, when Hava was thirteen years old, Ufo was already planning attacks on dye depots, the only remaining member of this is Tilman. The rest are either dead or arrested.

The students are not the first to draw attention to the colorless problem, Professor Sarah Liefkind already wanted an open debate in 2003 about the future of the colorless. That got her so much response that bodyguards had to be hired for Sarah. Together with Frank Tersteege of the ruling Middle Party, she founded the New Right party in 2004, a party for people who were concerned about the future of the country. She was convinced that the colorless should pay for their own dye, which is why some people called her a fascist. Liefkind was shot in 2006, but she survived the attack and then led a secluded life. Hava visits her expecting Liefkind to be able to give her advice and finds out that Liefkind has long since given up hope to get the masses moving.

Gerritsen wants to have her Concept converted to Concept M, thereby stopping the administration of dye, after which death will set in within the foreseeable future. Her intention is to set an example for other colorless people with her self-chosen death. She wants to do that in her own home in the company of her fellow fighters. But because this turns out differently than expected, Hava decides to travel to Ameland, the house of her parents where she spent the holidays as a child. She comes to the conclusion that she does not need any dye at all, on the contrary, she has never felt better. Hava makes the decision to issue an official statement, this is the impetus for other colorless people to reconsider the use of dye

What is a Concept?

Every colorless who is born receives an insurance concept, a treatment plan ranging from A to M. If a child is a minor and his parents earn little from the Concept A, the health insurance pays the care costs. If the parents are more resilient, they have to pay more, in the meantime concept changes can take place on medical or financial grounds. Hava’s parents can pay 60% of the cost, which translates into Concept C.

The book is told from the third person. With the help of flashbacks and radio and television clips, the story is told from Hava’s childhood to the conversion of her Concept to Concept M. Other persons who play a role are her mother Marijke and father Gerbrand, Elf, Tilman, Atte and Broer. van Ufo and right-wing activist Sarah Liefkind.

Elements that are important in the book:

Each colorless has its own Concept, including Gerritsen, who wants to convert her Concept to Concept M, where no more colorant is added and no intervention is required.

Solidarity at all costs and how far do you want to go with solidarity?

The story starts in 2020 when the main character is 25 years old and is told from the third person. Only when Gerritsen speaks to the press does the I-form speak. Hava Gerritsen is on her way to the Radboud Hospital to have her Concept converted, during the car ride she experiences the years from her childhood to the present through flashbacks.

The book is a science fiction novel, a story that is easy to read. The society of 2020 is recognizable and that also applies to the major themes that play a role. Colorlessness can be exchanged for all minority groups in 2018.

The fact that the book starts with an advice brochure for colorless people is special, so colorlessness no longer needs to be explained in the book itself. The book has an open ending and is concluded with a newspaper excerpt that discusses Hava Gerritsen’s official statement and the questions that arose as a result of her statement. Throughout the book use is made of radio and television fragments, which ensures that you get a good picture of society in 2020. You follow all events through the eyes of Gerritsen, which makes you involved as a reader. The book works towards a surprising climax and leaves you with the necessary questions. 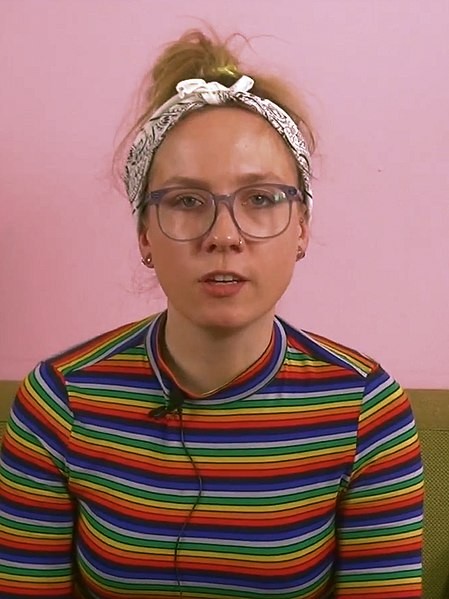 Romeijn was born on December 1, 1986 in Overasselt, a village near Nijmegen. She is a Dutch singer-songwriter and journalist. She studied composition in The Hague at the Royal Conservatoire and Dutch language and literature at the University of Utrecht and taught Dutch at the gymnasium. She is married to Bram Ieven (teaches Dutch at the University of Leiden) together they have a daughter.

Concept M is the debut of Aafke Romeijn, in addition to writing as an author, Romeijn works for de Volkskrant and is a columnist for Vrij Nederland and 3voor12 / Utrecht. Romeijn is no stranger to the general public, she makes herself heard on social media and was featured in the knowledge quiz “The smartest man”.

Centipede Romeijn has a successful career, but also has to contend with recurring periods of anxiety and depression.