In September 1938, an important event took place in the run-up to the Second World War; at the Munich conference, the European powers, notably British Prime Minister Neville Chamberlain, tried to keep the peace. This was achieved (at least temporarily) by ‘granting’ Hitler a part of Czechoslovakia. This is the subject of ‘Munich 1938’ written by Robert Harris. This historical thriller provides an interesting representation of the conference with a mix of fact and fiction.

As the title suggests, the book revolves around Munich in 1938. Several European powers gathered here in September for a conference. To understand that situation, it is first necessary to know what preceded that conference.

The reason for Munich: aggression and appeasement

From 1933 Hitler was in power in Germany. Although his military policy went against the agreements made after the First World War, the Allied countries did not intervene. They wanted to keep the peace at all costs, whatever appeasement-politics. When Hitler wants to add part of Czechoslovakia to Germany after Austria in 1938, the Czechoslovak president Edvard Bene refuses ?? however, to relinquish this area.

This is where the story begins. The first chapters take place in London, where Prime Minister Chamberlain sees the German and Czechoslovak tensions between them tense. He fears that these tensions could lead to a new war, and therefore calls on Germany to diplomacy. From that call then follows the Munich Conference in September 1938. 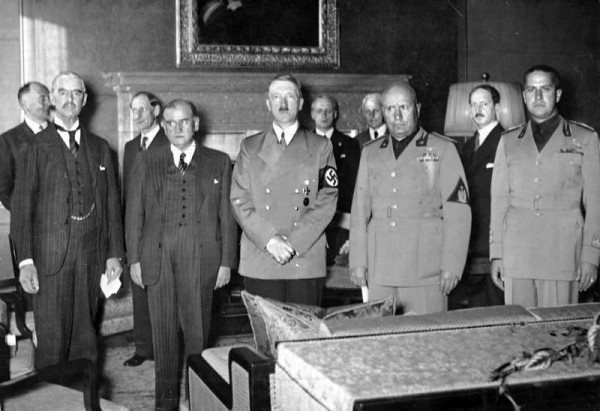 Then we read how Hitler, Chamberlain, Daladier and Mussolini on behalf of Germany, the United Kingdom, France and Italy meet for this conference on September 29, 1938. Chamberlain and Daladier stand up for Czechoslovakia, but at the same time they want to keep peace with Hitler. This complicates their negotiating position.

So far ‘München 1938’ follows the historical facts. Nevertheless, Harris has also thought of things, or presented them according to his own vision. In the middle of the diplomatic conference, he makes the book more interesting by having two (made-up) main characters play ‘a story within the story’.

Usually, the reader is watching Hugh Legat, a British diplomat and Chamberlain’s private secretary, from a s / he perspective. In Munich, Legat reconnects with his former fellow student Paul von Hartmann. The latter works for the German Ministry of Foreign Affairs. It turns out that Hartmann is a member of a resistance group against Hitler. Hartmann wants to persuade the British not to sign the treaty. His hope is that if there is a war, Hitler can be eliminated by a seizure of power. Contact with the English delegation is not without danger: the SS keeps a close eye on him.

These characters enliven the historical story and provide an interesting perspective. By taking the point of view of the diplomats rather than the negotiating politicians, Harris gives the reader a look at the process behind the negotiations. Hartmann’s input makes the dilemma concrete: does Chamberlain choose to give in and (temporary) peace, or to refuse and almost certainly war?

The knowledge that after Munich Hitler will start a world war nevertheless increases the importance of the conference in 1938 for the reader. You can actually read this between the lines; Hitler’s dominant position is clearly noticeable. The French and British can do little against the Fuehrer’s verbal abuse. The Munich Agreement is clearly not enough to stop warlike Hitler, which echoes throughout the book.

Still, Chamberlain is portrayed quite positively. He is often seen as naive; someone who simply believes Hitler’s promises. ‘Munich 1938’, on the other hand, describes a prime minister who did break Hitler’s story, but still holds back in his pursuit of peace. In that sense, the book gives Chamberlain some reparation, something that is perhaps justified.

This historical thriller is a successful combination of fact and fiction. By including Legat and Hartmann in the story, the Munich Conference is viewed from an original perspective. In addition, Harris uses his own interpretation of the events to make the story less ‘dry’ and factual. The compelling style of writing ensures that the reader feels, as it were, himself present in the negotiations with Hitler, thus clarifying the events leading up to the Second World War. Although the outcome is already known, these factors make the plot in ‘München 1938’ exciting to the end.

Which commands should I teach my puppy anyway and how?