Frisian and Gronings: language and similarities

Frisian and Gronings: language and similarities

In the north of the Netherlands there is a second official national language besides Dutch: Frisian. Frisian is mainly spoken in Friesland. Gronings, which is very similar to Frisian, does not have the same status for a number of reasons. Both languages ​​share a lot with each other and are closely related. Vocabulary and grammar usually correspond. Did Gronings originate from Frisian, or did Frisian originate from Gronings? Why are there many similarities between the two regional languages?

In Groningen people used to speak Frisian. Until the 16th century, the Ommelanden of the province of Groningen were Frisian, but that changed when the city of Groningen gained more power. The city of Groningen was a Saxon (Drenthe) city and had a lot of allure. The Groningers from the Ommelanden gradually (but relatively quickly) switched from Frisian to Gronings. Yet Frisian did not disappear completely. Many words and expressions continued to exist and mix with the Groningen of that time. It was during that time that Groningen as we know it today arose. 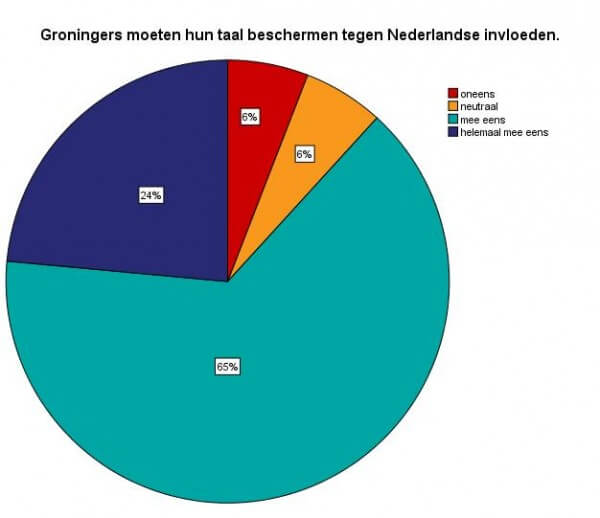 Dutch as the dominant language

Dutch has never been popular in the province of Groningen in previous centuries. This was also the case in Friesland. Nowadays Dutch as the dominant language in the Netherlands has a strong position and exerts a lot of influence on both Frisian and Groningen. Before the 15th century, people in Groningen were not interested in Dutch, but nowadays it is seen as a threat. It is unknown what the attitude is like in Friesland.

Groningen as a Friso-Saxon language

Mixing Saxon and Frisian turned out to work. Gronings originated and could develop. Nowadays, Gronings is seen as a variant of Low Saxon, but that is not entirely correct. Low Saxon consists of all kinds of dialects and regional languages. You have to think of Drents, Twents and Sallands. Low Saxon is also spoken across the border in Germany, although you cannot say exactly what ” the ” Low Saxon actually is. The differences are very large among themselves. Almost all Low Saxon regional languages ​​do not have a Frisian substrate. Gronings has that because of its Frisian history. Many linguists therefore suggest that Groningen actually forms a separate group: Friso-Saxon. Other language experts prefer to speak of North Low Saxon or East Frisian Low Saxon.

Similarities between Frisian and Gronings

Can Frisians and Groningers understand each other easily?

Below is a table where only a small number of words are listed that show similarities. Of course there are many more words to mention, but just a small selection to illustrate. The Frisian with which Groningen is compared is Westlauwers-Frisian. Please note that this does not necessarily mean that the Groningen words are taken from Frisian. It may also be the case that both Gronings and Frisian have taken over certain words from other languages. This can hardly ever be said with certainty.

The similarities between Frisian and Groningen are not always the same. Sometimes Frisian is more like standard Dutch, sometimes Gronings. In other cases, Gronings and Frisian resemble something completely different. However, in general, many words do match.

In Frisian there are words that have a different meaning in Groningen. These words, which you often write and pronounce in the same way, are called false friends. For example, a “false friend” is the word now far. This word means in Frisian weird or strange, but means correct in Groningen fun or suitable (beautiful). Also the word kobbe, that in Gronings and Frisian black-headed gull means can be found in other languages ​​but with a different meaning. In West Flemish and Zeelandic this word does not mean black-headed gull but spider.