In the Transylvania area of ​​Romania, outside the city of Cluj-Napoca you will find the Hoia Baciu forest. This forest takes its name from a shepherd who disappeared with his 200 sheep in this 250 hectare forest. It’s called the Bermuda Triangle of Transylvania. There are many mysteries in this forest that lean towards otherworldly explanations, such as trees with distinct shapes, reports of abnormal appearances, flying disc-shaped objects or a circle that reminds you of a crop circle. There seems to be a gate to another dimension, which may explain people’s disappearances or is it all because of Count Dracula?

In 1968, this forest came to prominence because of the appearance of a UFO. The biologist Alexandru Sift saw a disk-shaped flying object and captured it in a photo. Also on August 18, 1968, a military technician Emil Barnea took a remarkable photo showing a UFO. During this time many pictures emerged with inexplicable and possible alien appearances on them. Many lights and disc-shaped flying objects have been spotted in this forest. That makes alien life one of the first possible explanations for the separate events.

Many paranormal researchers such as Adrian Patrut are convinced that this forest is the Bermuda Triangle of Transylvania. Adrian Patrut has been investigating the area since 1970, but unfortunately cannot find a clear, convincing and above all provable explanation for the strange events. One of the explanations for the various disappearances could be a gateway to another dimension. Most local residents are convinced that if you enter this forest you have a high chance that you will not come back, people could not even be found. They even believe that this forest can induce a human to take his own life.

Like the disappearance of the shepherd that started it all, there is also a story about a five-year-old girl who disappeared in this forest. The curious thing about her is that she reappeared five years later in exactly the same undamaged clothing, with no memory of those past five years. Yet not everyone goes through a gate, it seems as if people are being chosen. The only question is by whom and based on what criteria. If there really was a gate to another dimension, it would seem logical that the memories would be erased before the people return. This can also indicate an alien cause.

In the forest there is a circle in which nothing grows, except for grass, which is also reminiscent of a crop circle. It is warmer in this circle than in the rest of the forest. The strangest things happen when entering this circle, especially equipment reflects everything. We hear strange squeaking noises and suddenly appearing lights that disappear just as quickly. There are several paranormal investigators who had problems with their electronic equipment after entering this forest. Especially in the bare circle, they can pick up the strangest sounds, such as the giggles of young women or children. The story goes that the ghosts of murdered Romanian farmers still wander there.

People who enter this forest can experience a rash, upright neck hairs, nausea and who knows what else. This could all end in the circle, but others argue that the circle makes it worse. Many also feel watched and get restless feelings. In photos faces are discovered that were not there before. The trees grow in distinct shapes and seem to have a life of their own. Inexplicable burn marks can be found on the leaves and branches. This alone can make people afraid, it may be because that fear makes people more receptive to experience something.

They investigate this forest in the Destination Truth program. Even twice, because it goes wrong the first time. In season 3, episode 1, they go for the first time and the second time in season 5, episode 2. One of the investigators ‘Evan’ is forced to move the first time by an invisible force, partly because of this they stop the shooting prematurely. When they go to the forest for the second time, Evan experiences special things again.

It begins with a ringing sound in Evan’s ear as they spend half an hour alone in the circle. He also gets dizzy and can’t stand it anymore in the circle, then the others see that even a little blood is coming out of his ear. Another investigator’s camera turned off as soon as he entered the circle. In the forest itself they have also made recordings of the sounds, which later show laughing children. Since they were there on the night, it seems very unlikely that any children were actually present. At the start of this program they fly over this forest in an airplane, where the bare circle stands out. With a heat sensor camera it is easy to see that this circle is warmer than the rest. The wind is blowing violently near the circle, forcing them to fly away from it. 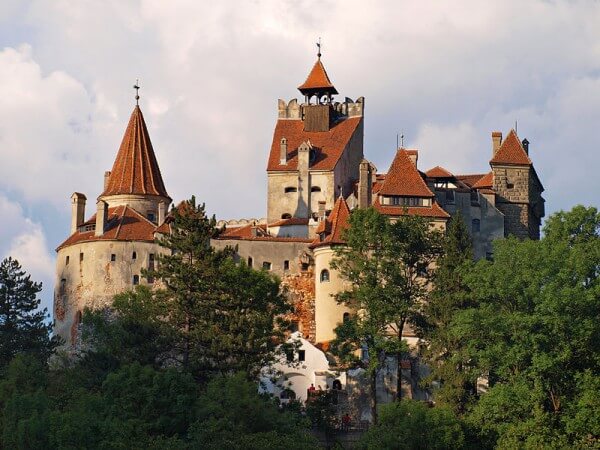 Close to the forest is Bran Castle, better known as Dracula’s Castle. It has a history that goes back more than 800 years. In 1211 the Teutonic Order started building. The Teutonic Order left in 1223 and construction of the castle was halted. Only in 1388 the castle was finished by the Saxon population. It served as an important border point, barter and to protect itself from attacks from neighboring countries. Later the Romanian royal family also lived here. Because of its eerie appearance and because it is located on a dangerous mountain, the stories about Count Dracula who created Bram Stoker began.

Bram Stoker probably based his Count Dracula on Vlad the third, who lived from 1431 to 1476. It is unknown whether he actually lived in Bran Castle, but he did several military missions in this area. This monarch of Wallachia was known for his atrocity, where people were impaled and bodies were left as an example to the others. Here he got his nickname Tepes, which means impaler. His father was dracul what Vlad made dracula, which means son of dracul. Vlad Tepes fled from Wallachia to Transylvania, but eventually died in a battle under vague circumstances. His life was at first separate from the stories of vampires, the real source for Bram Stoker was a different and even older story. Later they incorporated Vlad’s history into the stories.

A legend that contributed to Count Dracula’s story is that of the Strigoi, these are deceased people who leave their graves at night to drink the blood of people. Because of a lifetime curse or improper funeral rites, they will suffer this fate for all eternity. The legends of the local residents tell that these types of vampires also hide in the Hoia Baciu forest and take in people who enter the forest at night. The signs of drying out and weird burn marks on the trees and leaves would also have to do with the Strigoi. In their way they spread death and destruction, not only to humans. The high-pitched screams can also get rid of them and even the weird appearances in captured photos can be a ghost or a Strigoi. It can explain the disappearance of humans, but it cannot explain the alien appearances, the heat in the circle, and the separate lights without some source of source. It could also be that the forest itself is possessed.

Grooming the coat of long-haired cats

Grooming the coat of long-haired cats