How does lightning arise and what are the consequences?

How does lightning arise and what are the consequences?

Lightning is a natural phenomenon in which strong forces play a role. There are several theories about the origin of this. The best-known theory is Wilson’s induction theory. According to this theory, positive and negative charged particles are increasingly split from each other. This happens because of the strong wind that is in the storm. Ultimately, the electric fields have become so strong that the particles flow back together at a rapid pace. Lightning often has major consequences for the environment because of its power.

The origin of lightning & various theories

Lightning usually occurs when a severe storm is present. There are mainly three different lightning types, namely intra-cloud (also known as intra-cloud), cloud-cloud (or cloud-to-cloud) and cloud-ground (cloud-to-ground). These names indicate the location of the lightning. For example, intrawolk is lightning within one cloud while cloud-cloud is lightning moving between two clouds. Before lightning can occur, the storm must meet certain requirements. The different theories describe these unique conditions. However, scientists agree that lightning consists of multiple discharges because one electrical discharge is not enough to bridge the distances.

According to one of the theories, for example, ice must be present in the clouds before lightning can occur (the thermoelectric effect). This theory was coined by Mason and Latham. The other theories are Findeisen’s theory and Simpson’s waterfall theory (fragmentation theory). The best known and most likely theory is Wilson’s theory of induction. The current science of lightning and atmospheric research is based on this. According to this theory, there must be a split of positive and negative charged particles.

According to Mason and Latham’s theory, lightning is created when pressure differences arise. Because of these pressure differences (‘convection’) different charges would move in the air. However, like most theories of lightning origin, this theory is a setup that is less popular and likely than Wilson’s theory. 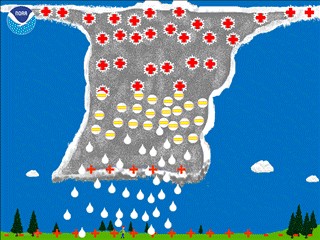 Before lightning occurs, all kinds of electric fields are built up. These electric fields arise when the fast winds increasingly split the positive and negative charged particles. Larger water droplets that are in the storm become more negatively charged than positive and bring these negative charges down. These small charged particles that are moved are called ‘ions’ and attract each other. The process of separating the particles is also known as polarization. Only when the electric fields are strong enough, a bridge from the clouds to the earth is possible.

The difference between positive and negative lightning bolts

The effects of lightning

The chance that you will be hit by lightning is minimal, but lightning is very deadly. Due to the high tension, your body is heated enormously within a short time. Because of this there is a considerable risk of heart failure and burns.

During a thunderstorm it is recommended to look for protection near buildings or vegetation that are not high. It is important to avoid tall objects. In addition, it is important not to be the highest point yourself.

Objects with a metal frame can serve as a Faraday cage. A car or boat (with metal parts) that can be locked can provide effective protection.

Dry areas can catch fire from lightning. As a result, forests and dry plains can disappear at a rapid pace. In the longer term, however, this is good for nature because it makes the soil fertile again. However, this usually takes one or more years.

The life cycle of plants and trees in the four seasons

Pet Facts: All About Pets

Pet Facts: All About Pets

Ruud de Wild ‘feels better than ever’ and returns to radio

Ruud de Wild ‘feels better than ever’ and returns to radio