The mongoose is a popular species. The mongoose or meerkat is best known after the BBC series ‘Meerkat Manor’ where the complete life of the mongoose was depicted in four series of 13 episodes. Everyone knows the image of these animals standing on their hind legs and looking around for danger approaching. There are different types of mongoose, such as the meerkat and surikat. In Africa you can see the surikats more often, a variant of the meerkat. The banded mongoose belongs to the surikat family. 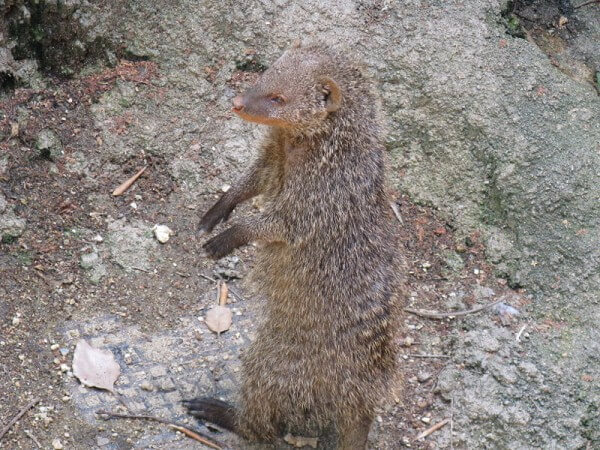 Broadly speaking, there are two types of mongoose; the social mongooses that live in groups and the solitary mongooses that live individually. The social mongoose of the organic sub-category meerkats have been the basis for a famous series shot in the Kalahari desert called Meerkat manor. This series, which has now been discontinued after four seasons, showed the life of a family of mongooses. The series clearly showed how the mongoose lives on a daily basis. There are other categories of mongooses such as the surikats. Many people confuse these two; even on the Dutch Wikipedia site it is wrong.

Daily course of the social mongoose

Mongooses start their day warming up in the sun. At night they slept in a cave underground. It can be very cold in the desert. In the winter months, from June to August, the mercury can drop below zero. Therefore, mongooses will start their day converting heat from the sun into body heat. The warming up is followed by excavation of the hole. Every day they are busy making improvements to their accommodation. Next, the dominant mongoose decides when to go out to forage. That can last until late afternoon. Mongoose sleep when it is dark. The sun sets at about 6 p.m.

The area where the mongooses go foraging and foraging for food depends on the rainfall and the places where they have searched on previous days. Mongoose eat all kinds of small animals such as centipedes and scorpions. Sometimes the group will meet a snake on the way and in this case they will try to chase the snake away. Some snakes are deadly to humans, but mongooses can survive a snake bite, but they are seriously ill for three days after a snake bite. 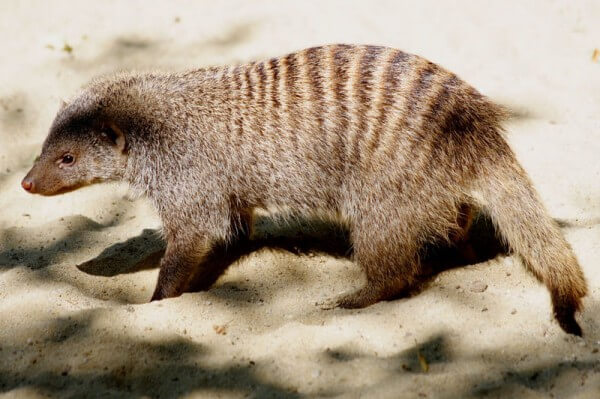 Mongoose and their territory

Mongoose live in a territorial area. They will not often run into their neighbors. They sometimes cross the border of their area to look for more food. When the other mongoose group realizes this, it may come to a confrontation. One of the groups starts with the attack, after which a real hand-to-hand fight ensues. At the end of the fight, the wounds are licked and the retreating side that loses out will have to give up some of their territory.

Not every mongoose goes foraging. A group member stays behind with the social mongooses to watch out for the little ones. There may be snakes in the area that crawl into the den and eat the young ones. The mongoose on duty has a lot less to eat. Sometimes he goes out for a few minutes to look for food, but most of the time he keeps watch in front of the den. Incidentally, a mongoose can do little against a snake. However, a mongoose bite into a snake is enough to scare it away. What the mongoose is very good at is stretching time. He attacks the snake so that it shoots back. At some point, the rest of the mongoose group will return and help him fight the snake. A snake is no match for a group of mongoose; these can easily handle a snake together. They surround him and regularly bite him in various places while other mongooses distract the snake themselves.

Mongoose on the lookout

When foraging, there is one mongoose that is more attentive than other mongoose. Mongoose always live in fear of being attacked. Snakes can attack them from the ground, but what is much more dangerous are birds of prey. They can crash down on a mongoose from above to pick it off the ground and eat it. When mongooses perceive a bird of prey, they take shelter under a tree or forest edge. The mongoose who has the task of being on the lookout looks for a higher point in the landscape such as a tree branch, or he stands on his hind legs.

Mongoose have different burrows. From time to time people move from cave complex. They may also sometimes decide to crawl into a burrow while foraging. It must be watched whether the cave is not inhabited by now. Ground squirrels and snakes can take over the old mongoose burrows. During a move, a few mongooses take the youngsters in their mouth to drag them to the new underground complex. A move is not devoid of danger.

Mongoose are not really afraid of people. They can sometimes roam hotel grounds in search of food. They ignore people unless they get too close. Animals such as squirrels and monkeys sometimes want to enter the restaurant area of ​​a hotel to steal some nuts, fruit or sugar, but the mongoose generally does not.

The banded mongoose has several black stripes across its back. Besides this mongoose there are also pygmy mongoose; these also live in groups.

The Latin name of banded mongoose is mungos mungo. In English it is called the beast mongoose. The English also mention meerkats, the name of a special subspecies found only in the Kalahari Desert. Many people call all mongooses meerkats, but that’s not true. For the Dutch, the meerkat is an extra confusing name because the monkey species that is called vervet monkeys in English, is officially called green meerkatten in Dutch. 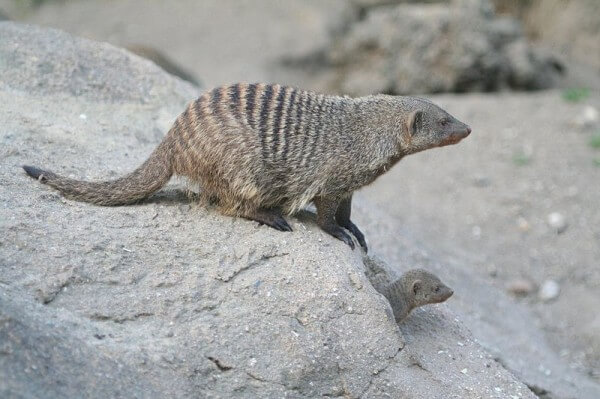 To make it even more difficult, the English use a wrong word for the meerkat or Suricata suricatta; the originally Dutch word ‘meerkat’. However, the meerkat and the surikat are different biological species of mongoose.

There are different types of mongooses. Not all live in social form; some live solitary.

The Irish Wolfhound: The largest breed of dog in the world

Airbnb is still going public, despite the pandemic

Airbnb is still going public, despite the pandemic