The ostrich loves to run, but how do you run when the wind is very strong and the wind just won’t move? Fiet finds out in this picture book, which became picture book of the year in 2011 and was awarded a Zilveren Griffel. Only when he stops moving against the wind and lets himself go with the current does he succeed, because with the wind at his back he can of course run much faster.

Bibi Dumon Tak was born in 1964, in Rotterdam, she studied Dutch language and literature. Bibi has written books for children, young people and adults. She loves facts and therefore often writes non-fiction books, in which animals are the subject with great regularity. By reading her books you will learn interesting things that you usually do not find on the internet. Not only do the facts stand out in her books, the texts also catch the eye because they are written in beautiful visual language, so that they suck the reader into the subject and the story.

Bibi Dumon Tak also wrote other children’s books, such as:

Bibi Dumon Tak has won the following prizes with her books:

Noëlle Smit was born in 1972, in Alkmaar. She learned to make illustrations at the High School for the Arts in Utrecht and during her training she already made a book for publishing house Lemniscaat: Het pewter soldierje. This eventually resulted in her illustrating many more children’s books. The illustrations are made with ecoline, with a lot of color and movement. There are also often funny details in it. This is also the case in the picture book ‘Fiet wants to run’.

The story of Fiet

Fiet is an ostrich who likes to run. Today, however, the strong wind is holding him back. All other animals want to help him. The ducks ask him to float in the water. The snail wants to crawl further with Fiet. The worm wants to snuggle underground together. The gulls ask Fiet to fly, the Pike to swim and the hare to take shelter. Even the trees want to help by simply leaving Fiet standing still. But Fiet doesn’t want all this, he just wants to run! Only when Fiet turns to run away from the wind does he manage to run again.

‘Step aside for a moment’, Fiet calls to the wind. “I have to get past it.” But the wind doesn’t think about it, and it whistles even harder around his ears. “Drop and start crawling!” says a snail. “Then you also get ahead.” But Fiet doesn’t want to crawl. Bike wants to run! 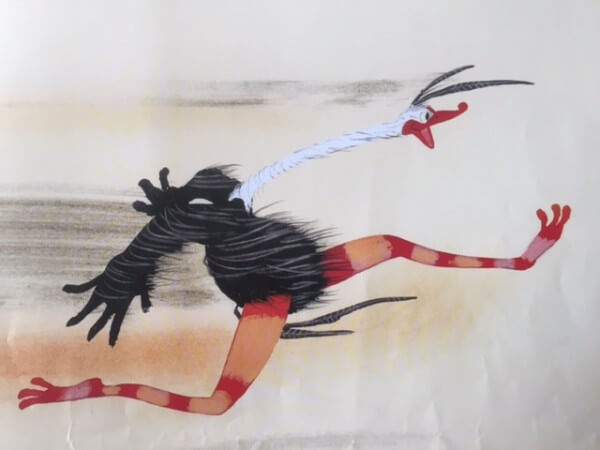 The color illustrations portray Fiet and the other animals. It is clear to see that it is very windy. In the images, Fiet’s long body moves with the wind, from the front and the back. The ostrich’s facial expressions are portrayed, you see the anger and determination in his eyes. And at the end the joy when Fiet manages to run again.

An ostrich really is the perfect animal for this story. As the fastest biped in the world, which also cannot fly, it is very logical that Fiet wants to run. His long body lends itself perfectly to the illustrations, which are therefore both funny and appeal to the imagination. The other animals also come to life through the use of the many colors and young children will quickly recognize them. The accompanying movements described, such as crawling, twisting, swimming and flying, will be very recognizable for the young target group.

In this story, the breeze becomes almost a character with its own character, an own opinion and a rigidity who does not want to budge through Bibi Dumon Tak’s beautiful, visual language. In the text, the wind seems to really compete with Fiet, as if a match is emerging.

In short, it is no mystery why this book became Picture Book of the Year 2011 and won a Zilveren Griffel, everything just seems to fit in this story: main character, use of language, illustrations and a satisfying and surprising ending for the target group. Very suitable for toddlers and perhaps also for slightly younger children.