Second picture book about Stanneke Snowmanneke, in which a stranger visits his country called Vriesland. Stanneke feels sorry for this new snowman, who is the only one who does not wear a hat, so he lends him his hat for a few days. But Stanneke does not get his hat back from the stranger and starts looking for a solution. Would he manage to get his hat back?

Guido van Genechten was born in 1957 and comes from Mol, Belgium. He has a graphic education and worked for a long time in a printing company. In order to fully focus on illustrating, he followed additional training at the Academy of Visual Arts. Today he is a full-time author / illustrator.

In his work Guido van Genechten uses clean lines and bright colors, he works with colored pencils, watercolor, ink and gouache. The illustrations usually show little detail, making them very accessible for toddlers and preschoolers. The themes are also accessible and recognizable for toddlers and preschoolers. Van Genechten usually writes the lyrics himself. His books are sold in more than 30 countries in 2017.

In addition to the books about Stanneke Snowmanneke, Guido van Genechten has made other books, such as:

Guido van Genechten has the following awards to his name:

Description of the story

Stanneke Snowmanneke lives in Vriesland, together with many other snowmen. All these snowmen wear headgear. One day a stranger named Dimitri arrives in Vriesland, he does not wear a hat, but says that his hat has been lost during his long journey. Stanneke feels sorry for Dimitri and lends him his hat for a few days. After ten days, Stanneke asks for his hat back to Dimitri, but he likes it so much that he doesn’t want to give it back. Stanneke is sad and asks advice from the wise Alfred. Together they come to a good solution: if all snowmen share their headgear, you only have to walk around with your head bare for one day.

The first days Stanneke felt strange, without a hat. Different. A bit like a stranger in his own country. But then he thought of poor Dimitri. How sad he’d been because his hat had blown away. And how happy he was now with his hat. 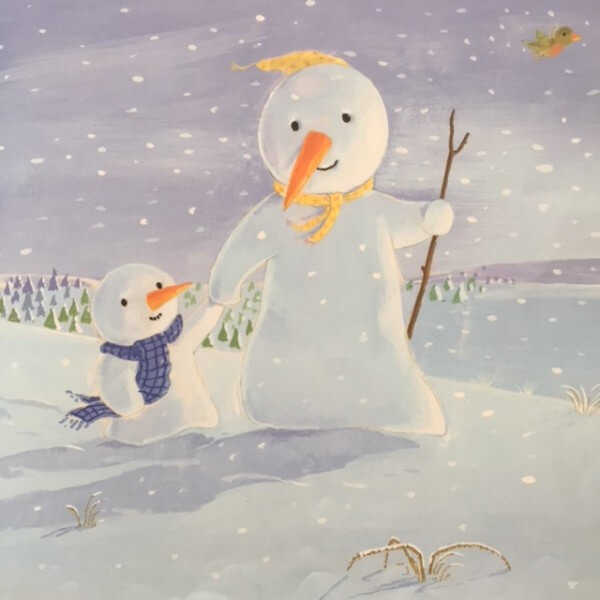 The illustrations complete the story, all snowmen are portrayed with striking colors. All different headgear is also clearly visible. In the images even more different headgear can be distinguished than are mentioned in the text. The snowmen look friendly and show human characteristics. For example, it can be seen that Stanneke is holding the hand of the wise Alfred and the facial expressions of the snowmen change as the emotion changes. The first and last two pages of the book contain an overview of portrait illustrations of the snowmen.

This picture book about Stanneke sneeuwmanneke is very accessible for both pre-schoolers and older toddlers, especially the illustrations play an important role in this, the snowmen are clearly recognizable and look cute.

Guido van Genechten is a Flemish writer, you can read that a bit in the text, but it is certainly not disturbing. Stanneke Snowmanneke, for example, sounds very Flemish, in the Netherlands we rather speak of a snowman.

The book can be used for multiple themes, at home or at school. This book is perhaps the most accessible for the theme of winter, around the seasons. This book can also be used for themes around foreigners and sharing, but it does require a little more explanation. For example, a child may find it unpleasant that Dimitri does not return the hat to Stanneke, which may make him appear somewhat ungrateful. The illustrations show that later in the story Dimitri does participate in sharing the headgear, unfortunately this cannot be read in the story, but can be explained very well to children by pointing it out.

A very recognizable and accessible picture book, suitable for toddlers and preschoolers, around different themes within their experience world.

The life of amphibians

Stamppot: it's again ??, again for stamppot