When the pigeon has to take a Telemark exam for his diving certificate, he has a problem: he cannot dive at all. Slowly he moves up the queue and when it is finally his turn, something remarkable happens, allowing Telemark to pass his diving diploma after all. Beautiful, recognizable picture book for children with fear of failure, for example when obtaining their swimming diploma. And for all parents who want their child to succeed.

Edward van de Vendel was born in 1964. He studied at the pedagogical academy. After his studies, he founded a primary school with others, of which he was director. After a few years, he went back to teaching at another school as a master. Van de Vendel wrote his first book, a collection of poems called ‘Betrap me!’, In 1996 and became a full-time writer in 2001. Today he still writes: poems, theater, youth novels and non-fiction. He also gives lectures.

Besides ‘The pigeon that couldn’t dive’ Edward van de Vendel wrote many more books, some examples:

Edward van de Vendel has won the following prizes with his books:

Description of the story

This story is about a pigeon called Telemark. Like all other pigeons, Telemark has to get his diving diploma. The intention is that he dives down from the gutter, ends up next to the tables with people eating and then picks up a crumb and then flies up again. There is one problem, however: Telemark cannot dive, he keeps going wrong. Slowly he moves up in line until it’s his turn. Then something strange happens. Telemark does not dive down, but flies up. Then he suddenly drops and eventually ends up on the table, in the middle of a container of lettuce. The other pigeons think this is such a successful action by Telemark that he gets a good ten.

Excerpt from the story

Daddy Hood. He was the diving champion from two thousand and one to two thousand and five. He had medals for it. But he never said anything unkind to Telemark. He just looked so … so … so quiet. 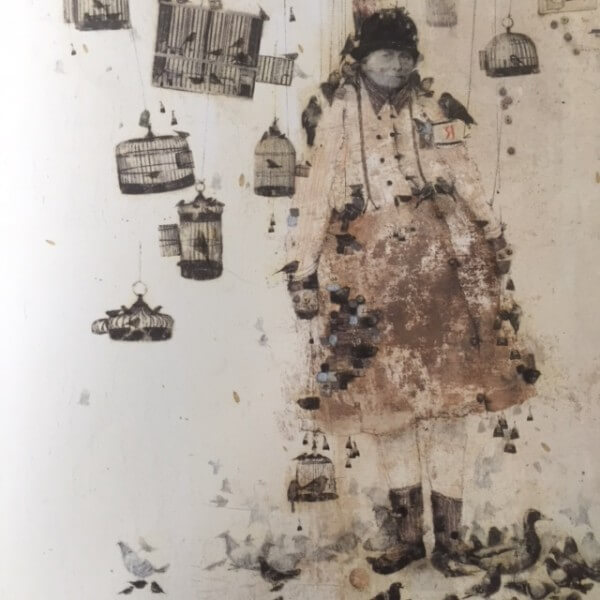 The illustrations include old photos, which gives the impression that this story took place in the past. This is in contrast to the text, which could be timeless. The illustrations show the group behavior of pigeons, you see groups of pigeons in trees, on the ground and on electrical wires.

Surprising story about fear of failure with special illustrations

This story is a boost for anyone who dreads something and thinks they cannot do something. When push comes to shove, you can rely on your own talents, even if that may not be exactly what is being asked. And how proud your parents will be, this story clearly shows how important that is for children. This story will certainly be recognizable for children who are taking swimming lessons.

The story is not commonplace, the happy ending is surprising. The illustrations make this book even more special. It feels nostalgic, as if you were in an old village of the past and your great-grandfather and mother could sit at the table where Telemark lands on top. The special character of this book means that in addition to toddlers, it could also appeal to slightly older children. The story is not far from children, they will certainly recognize themselves in Telemark. However, the illustrations will need some explanation, but can also be a reason for a nice conversation about this book.

In short, a beautifully recognizable story, with a surprisingly good ending, packaged in special illustrations. The combination of this story with these illustrations makes this book stand out above the average.