This relatively young breed is the result of selective breeding by someone trying to change the somewhat fuzzy spotting pattern on her cat’s coat. After several attempts, some kittens were born that had a pronounced mark on the head, which is not common. That was the impetus for the breeder to continue and eventually go for the drawing of the wild tiger. Ultimately, this became the basis from which the new toyger breed emerged.

In the eighties the American breeder Judy Sugden started with her tabby cat, in order to get the pattern of the coat of this cat more emphatic. After a few litters she appears not to make sufficient progress. After this breeder imported a stray cat with a distinctive mark on the head from India, she set up a thorough breeding program together with two other breeders (Anthony Hutcherson and Alice McKee) to get the markings purer and this gives her the idea to drawing of the wild tiger on a new purebred cat.

The breeding program led to a registration of the toyger in 1993 by The International Cas Association. However, it was not until 2007 that the breed was also awarded Full Championship Status. It is not an old breed yet, which means that breeders worldwide work together in 2019 to further develop the breed. This applies to the marking, the color combination as well as a wider distribution of the breed worldwide. 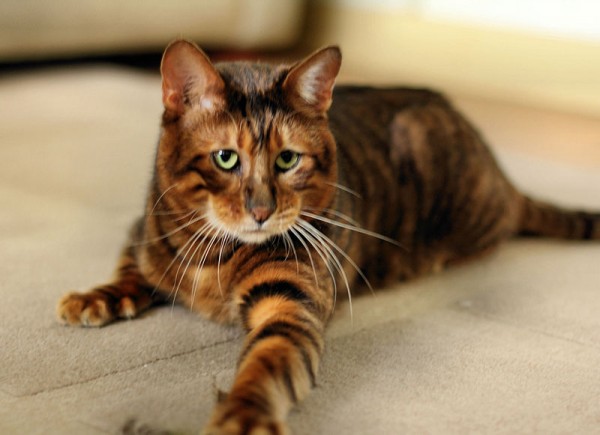 What are the breed characteristics of the toyger?

The cat has a distinct brindle coat, emphasizing the difference between the base color and stripes on the coat. The stripes run down the back to the long tail. Furthermore, the striped drawing is in most cases also clearly visible on the chest. However, some kittens have a completely white breast. The coat has a great color contrast, from gold / beige as a base color to black or almost black stripes. The coat is short, shiny and soft in texture. Brushing once a week is more than enough.

Because Bengal cats were bred in an earlier stage, they are relatively sturdy muscular cats. The weight of a cat can be up to 5.5 to 6.5 kilograms. The hangover is significantly heavier and can vary from 8 to 10 kilograms. These cats are average in size and have a heavy bone structure.

The head is oval and the muzzle is relatively large and has a somewhat cylindrical appearance. The ears are wide on the head, but are not large and have a rounded shape. The eyes are almond shaped and of medium size. It is sometimes said that these cats have a proud and dignified look in their eyes.

This cat has a soft and friendly character. She is affectionate and likes to be around you. Although she likes to be around people, this cat also has a strong need for freedom of movement. She doesn’t necessarily have to go outside, but she does need space. Like almost every cat, she also wants to be able to retreat to her own space.

She has a curious nature, low stress and likes to play. You can play with people but also with other cats or dogs. These cats can live well with other cats, dogs and children. An exceptional side effect for a cat is that this breed is easy to train.

This breed is in good health and there are no demonstrable hereditary disorders as yet. The reason may be that it bred different breeds and common domestic cats. This can be a so-called ?? pure ?? line. This means that there is little inbreeding and therefore a much smaller chance of inherited health problems.

Incidentally, a kitten with a health problem can of course always be born with cats in a pure line. You can never completely prevent that. 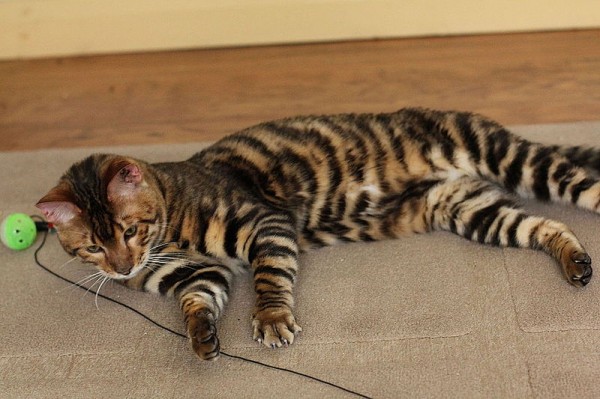 It is still a young breed and that also means that there are not many breeders worldwide. This means that only a limited number of litters are born on an annual basis (this to prevent inbreeding). Sometimes breeders have a list that you can put yourself on if you are interested in a kitten. The breeder knows when he wants to and can have the female mated and that means that it is known when the breeder expects a litter, at least if the female has been successfully mated.

The cost of the toyger ranges from about ?? 800 to some ?? 1,500. The higher the amount, the more the cat the show factor. has. That is to say to what extent the kitten meets all breed characteristics (and has to start producing offspring). The showworthiness of a kitten of course does not affect how sweet a kitten is.

The toyger is perhaps a “designer cat”, as this cat is sometimes called in America. However, it is also just a fun, sweet and playful cat. A cat with a healthy curiosity and appearance, she passes for a kind of mini tiger with a beautiful, soft coat.

Audi Q5 and SQ5 TDI Sportback: a question of lifestyle

Audi Q5 and SQ5 TDI Sportback: a question of lifestyle