The Peruvian hairless dog is a purebred dog that is not really common in the Netherlands. This dog with streamlined build is a so-called primal or natural breed. That is to say it is an old breed and not a consciously – human – bred dog. The Peruvian Hairless Dog is a sweet, affectionate, watchful companion dog. What is his history and what exactly are the breed characteristics of this dog?

The Peruvian Hairless Dog, The Basics

The Peruvian Hairless Dog is a natural breed, called a primordial breed. That is to say, it is an old, unconsciously bred purebred dog. With regard to the health of this dog, this means that there are no (unconsciously) bred genetic abnormalities or diseases due to inbreeding. This means that this dog generally enjoys good health and can be at least 12 years old.

While the dog’s name suggests that the breed originated in Peru, this cannot be stated with certainty. Since the largest population of this breed lived in the coastal regions of Peru, the dog has been given ‘Peruvian’ in its name.

In addition, the first excavations in Peru date back to the 2nd century BC. The dog can be found in many old images. This only further emphasizes the Peruvian heritage of this dog. It is a myth that this dog lived in the mountains with the Incas. This dog has always lived in the art areas of Peru.

During the Spanish conquests in South America, from the end of the fifteenth century, the dog was banned. This was done from a religious point of view. Many crested dogs were killed at the time of the conquests. Only the farmers in the Peruvian coastal area had a sacred belief in the healing powers of this dog. This provided the dogs with the necessary protection and ensures that the dog is not extinct. Many Peruvians do not like this dog, but keep it. This has to do with the fact that today the belief in the healing gift of this dog is still alive. This dog is walking around on many a farmyard.

To ensure that the dog does not die out, special breed characteristics were drawn up for this breed in the eighties of the last century. These official breed characteristics date from 1985. In the meantime, this dog has even received a kind of protected status. It is established by law that this dog must be kept in the immediate vicinity of all historic coastal spots in Peru. 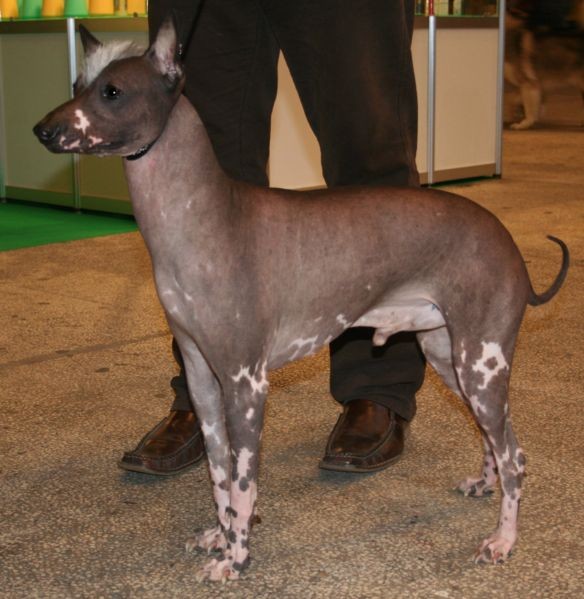 The external breed characteristics are as follows:

This dog has a streamlined body with a domed (this is a slight arc shape) top, a straight back and a wide rib cage. The height at the withers can vary, ie:

The skin may contain some pink spots. The number of spots and the total area of ​​these pink spots is not defined within the breed characteristics.

With little to no hair, the care of this dog seems minimal, but the (bald) skin should be scrubbed with some regularity. Then the skin must be rubbed with a special oil that leaves a greasy layer on the skin. If the dog is light in color, the skin can burn in the sun. It is best to keep the dog out of the sun, but this is not always feasible (certainly not in the summer months). In that case, applying a good sunscreen or sunblock is important. If the dog is in the sun a lot, it is good to lubricate more often. Burning of the skin can be just as painful in dogs as it is in humans.

This dog’s eyes are medium in size and slightly almond shaped. The colors can be diverse and vary from almost black to brown or somewhat orange / yellowish. This has to do with the color of the coat / skin.

The Peruvian Hairless Dog has slender, slender legs and so-called hare feet. The dog has sturdy foot pads and the feet and foot pads are shaped in such a way that the dog can more or less grab something with them.

The tail has a fairly low set, is relatively thick at the base and tapered slowly. When the dog moves into action, the tail rises slightly and is just above the backline. The end of the tail curls up a bit, but the tail is never fully curled up.

Although it is a watchful and alert dog, it is by no means a restless dog. Restlessness is a trait that you often see in watchful dogs. The dog has a noble appearance, is independent, intelligent and protective.

The Peruvian hairless dog likes to be among people. This dog is affectionate and soft in character. Due to its watchful nature, this dog can at first be somewhat reluctant to strange people who venture into its immediate environment. If the dog has experienced the person or persons as ‘good’, the dog is relaxed and accessible again.

It is not a dog that you have to train with a heavy hand. That is, do not shout and correct continuously. If you know how to approach the dog in a respectful way, then this dog is easy to train. Accept the dog. This dog likes to think of itself as some kind of “companion” from the human.

The Peruvian Hairless Dog is a strong primal breed. They are watchful, affectionate dogs who like to live in close proximity to humans. If you know how to approach this sweet and alert companion dog in the right way, then you can have a nice companion.

Cat without stress in the carrier to the vet