The Serbian fir is a fast-growing conifer that is popular as a Christmas tree. The tree has green needles with a blue-green underside. The Serbian spruce has a limited ecological function in the Netherlands, but will create a lot of atmosphere in many gardens, especially in winter. The Serbian spruce is monoecious, both male and female cones are present on a tree and hanging dark brown cones will emerge from the female cones.

Distribution of the Serbian fir

If someone with a Serbian spruce in hand claimed to have just bought a conifer, it would be looked at strange. Yet nothing could be further from the truth, because a fir is nothing more than a conifer, because all conifers are conifers. Conifer literally means “cone bearer” and covers an order of about 600 species taxonomically. This group of conifers also includes those popularly called conifers: the California cypress species (Chamaecyparis lawsoniana), the western tree of life (Thuja plicata) and the giant tree of life (Thuja occidentalis).

The popular Serbian fir also belongs to the group of conifers. This tree, which is best known for being used as a Christmas tree next to the heating in many living rooms at the end of December, originates from Southeast Europe, the first seed was brought to Central Europe around 1890, where the tree is mainly used in gardens and parks as ornamental tree was planted. In Scandinavia, the Serbian spruce is often planted for wood production, but in the Netherlands the tree mainly serves as an ornamental tree and has no ecological function except for shelter for animals. The spruce is resistant to air pollution, better than the Norway spruce. 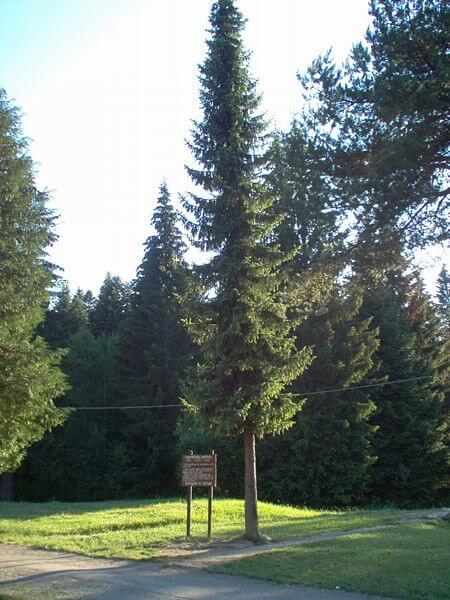 The Serbian spruce can reach a height of 30 to 35 meters, sometimes even 50, with a trunk diameter of 70 cm and it grows about 70 to 100 cm per year. In the beginning, the increasing length per year will be a bit smaller, but from the age of four or five years the annual new buds start to show considerable lengths. In 25 years, this fir has managed to reach a length of 30 meters. The Serbian spruce can usually reach an age of 100 to 150 years in any case.

The needles of the Serbian spruce can live up to ten to twelve years and are sturdy, but not stabbing and do not fall out quickly, which makes the tree very popular as a Christmas tree. Due to the blue-green color of the Serbian spruce, the tree is sometimes confused with the blue spruce (Picea pungens). This color is caused by the underside of the needles which, thanks to two white stripes (the stomata), provide a blue-green glow. Because the top of the needles are ?? normal ?? green, it often seems as if the tree has two colors. By the way, the needles of the blue spruce are completely blue-green on the top and bottom. The 2 centimeter long needles of the Serbian fir are attached to sturdy short stems of 1 mm, and among the needles can be found all the buds that will sprout in the following year. Another feature is the curled branches that give the tree something graceful.

In late spring the buds start to sprout and the first light green dots become visible, these are the first signs of new upcoming branches. In the beginning these branches do not grow quickly, but from the summer onwards the Serbian spruce will grow considerably and the newly formed top that was previously 15 centimeters suddenly appears to shoot out to 80 centimeters. The bark consists of pale reddish-brown scales that lie on top of each other. After the top has been removed, the tree is well able to create a new top.

The Serbian spruce is monoecious with unisexual male and female cones, these catkins are either upright or in the plane of the branch, at least not pendulous. The upright female catkins are reddish in color, once fertilized and matured, drooping dark brown cones develop. The tree will form cones at a young age, the ripened cone contains the seeds from which the first seedlings will emerge. A seedling still grows very slowly, a tree of one meter tall can be almost ten years old. 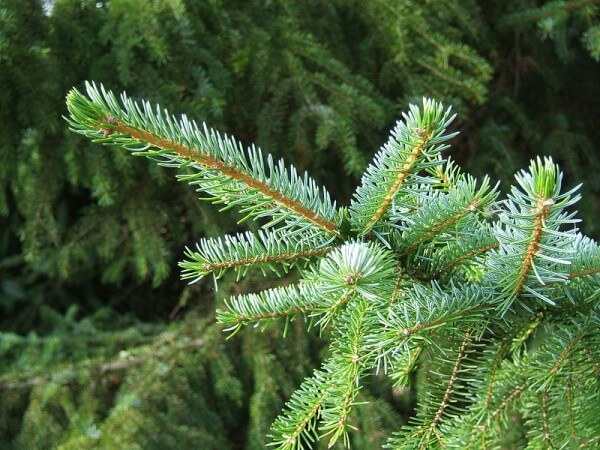 The underside of the needles have two white stripes / Source: MPF, Wikimedia Commons (CC BY-2.5)

Planting in your own garden

Shortly after the turn of the year, the Serbian spruces are available for free, these are discarded Christmas trees that are collected by the local municipality. The Serbian fir is also easy to plant in January, in most cases the tree takes root well. It must be taken into account that the Serbian spruce will grow very high, after 25 years there can be a 30 meter high spruce in the garden. In winter, the Serbian spruce is a beautiful eye-catcher, especially when there is snow, the tree can then create a fairytale atmosphere. In autumn many cross spiders make their webs in the branches, during the morning dew these webs become clearly visible. The advantage of an evergreen tree is that no falling leaves have to be cleaned up, and the tree also provides some privacy 365 days a year.

A Serbian spruce does not require maintenance and pruning is generally not necessary, but care can be taken that the tree does not form a second top, if this is the case, it must be removed. Lower branches can also be shortened slightly to keep the tree in a symmetrical shape. The best time to do this is in April and May, before the new light green shoots appear. A really beautiful fir always has branches to the ground, large specimens that are in gardens, are often stripped of the lower branches by the owner, the tree does not become more beautiful.

Bassie and Adriaan have to pay the Baron and others 15,000 euros

Bassie and Adriaan have to pay the Baron and others 15,000 euros