Торт “Наполеон”, a cake with this name is originally from France, it cannot be otherwise. Here this type of pastry was originally called “gâteau de mille-feuilles” which means “cake with a thousand layers”. Traditionally, a mille-feuille is made up of three layers of puff pastry, between which two layers of pastry cream are placed and the top layer of dough is covered with a layer of powdered sugar. Later variants have a glaze layer and that is how the typical Dutch tompus was created. However, the Russian Tarte Napoleon that we are going to make here is of a completely different caliber!

The Russian pie has many more layers than the tompus and the top is not glazed, but crumbs of dough. Almost every European country has its own variation on the mille-feuille theme, for example in England the ‘vanilla slice’ is known, in Sweden and in Finland the ‘Napoleonbakelse’ and in Spain the ‘Milhojas’, which somewhat resembles the Russian one. Tarte Napoleon. 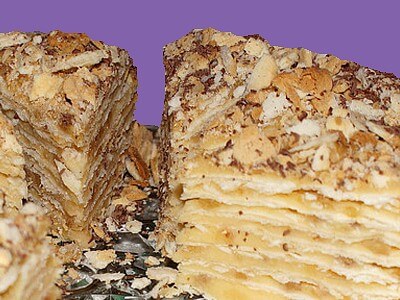 The mille-feuille is first described in 1651 by François Pierre La Varenne in Le Cuisinier François, well before Napoleon appeared on the world stage and although there are numerous legends about this, there is no evidence that the name of the cake could be linked. are those of the emperor. It would rather be a derivative of the French word Napolitain that refers to the Italian city of Naples, the Italians are therefore convinced that the pastry originally came from Italy.

It is a laborious cake, it really takes some time, but the result is overwhelmingly delicious and you will certainly reap fame with it! Keep in mind that it requires a long cooling time, so make it a day before serving.

Ingredients for the cake:

Ingredients for the filling:

We prepare this cake in stages, first we make the dough, then we bake all layers of dough separately, then we make the filling and put together the cake, then it must be cooled for at least six hours and then we do the finishing.

Preparation of the dough:

Now cover the dough balls with cling film and put them in the fridge for at least one to one and a half hours.

Bake the dough layers one by one

The dough balls are rolled out into twelve thin layers that you bake individually, the most convenient is to bake them on the back of your oven baking tray, on which you also roll out the dough layer that is next to bake.

When all the dough is baked, we can start making the filling, a custard custard.

Vanilla sugar or vanilla pods for the filling

Instead of vanilla sugar you can also use a vanilla pod to obtain an even more beautiful richly scented cream. The vanilla pod should be cut open, scrape out the seeds with a knife and put them in the milk with the pods. Bring the milk to the boil, stirring occasionally, then remove from the heat, remove the pod and strain through a fine sieve.

the filling is now ready to use in the cake.

For convenience, we build the cake in a form covered with cling film, so it is not a problem if we mess with the filling, it eventually ends up in the right place when we push the film against the cake after filling.

The biggest surprise of this exquisite cake is of course on the inside, serve with a dash of whipped cream.