The appearance and way of life of the Indian elephant

The appearance and way of life of the Indian elephant

The Indian elephant is only found in India. The mammal eats no less than 150 kilograms of food per day. This allows him to provide himself with enough energy to survive. He needs that energy, among other things, to be able to cover longer distances. These mammals live in herds, which means they can increase their chances of survival. The young ones need extra protection against predators. Despite the fact that tigers live in their habitat, humans are the greatest threat. To promote the welfare of these animals, the Indian government has set up the ‘Project Elephant’ initiative.

The range of the Indian elephant

The scientific name of the Indian elephant is ‘Elephas maximus indicus’. He belongs to the Asian elephants. An elephant of the female gender is known as an ‘elephant cow’. A male elephant is also referred to as an ‘elephant bull’. This intelligent mammal is only found in India (Asia). Here it can be found in dense environments. However, its habitat has become smaller and smaller because the local population needs more and more space for agriculture in the area. The trees that are felled for this are essential for the survival of this animal species. The Indian elephant also follows migration routes that are seriously threatened because of agriculture. Due to its body size, the animal needs a lot of space.

These huge mammals can weigh up to about 5 to 6 tons. Because they can reach a height of 3 meters, they have the opportunity to eat the leaves of trees. The Indian elephant has smaller ears than the African elephant species. Female elephants are generally smaller than the males and therefore differ even more from the African species.

Elephants of the female sex have smaller (or even none) tusks

Some females lack their tusks. This depends on their genetic predisposition. The Indian elephant’s tusks are also much smaller than those of its African counterparts.

Elephants are herbivores, or herbivores. This means that they mainly eat leaves and grass. In addition, they eat tree bark and all kinds of fruits. The Indian elephant eats no less than 150 kilograms of vegetation per day. This provides enough energy to cover longer distances. They move in herds to ensure their safety. 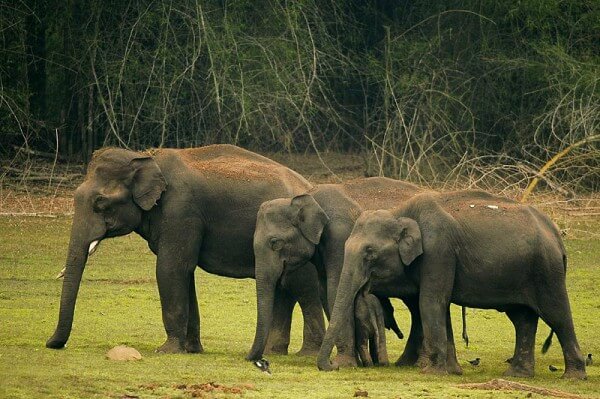 Elephants stay together for a large part of their lives to increase their chances of survival. When they drink from a river, there are usually some who are extra on the lookout for predators. A herd is led by a female. This elephant cow is usually one of the oldest elephants in the herd. These are larger and more experienced than the younger ones. The males are called ‘elephant bulls’. Most of the middle-aged male elephants reside just outside the herd. The herd protects the offspring.

Tigers can be a danger

The young offspring are more likely to fall victim to a tiger than an adult. A tiger does not normally have the ability to kill an adult. However, there is a unique case where an adult elephant was killed by two tigers. This elephant may have already been weakened. This incident occurred in ‘Kerala’ (South West India). Humans are the greatest danger to this species, despite the presence of predators in its environment.

The mating season and the offspring

During the mating season these animals are incalculable and can therefore be dangerous during this period. During this period they secrete a certain substance. This substance is produced by means of certain glands located at both temples. After fertilization, the Indian elephant has a gestation period of no less than 21 months. They can drink breast milk from their mothers for up to two years. After these two years they will stay with their mother for a while. This means that they are very well protected from predators. They do this by standing around the offspring with the entire herd so that the predators have trouble attacking a youngster. When a female goes in search of food, another elephant takes care of her offspring specifically.

The Indian elephant can be tamed

Unlike the African elephant species, the Indian elephant can be tamed. This allows the mammal to be used, among other things, as a means of transport. However, this reduces the chance of having offspring. These animals are also often severely abused by their “mahout”, or their caretaker. An initiative by the Indian government in 1992 called ‘Project Elephant’ has prompted action to protect these animals. The natural habitat and migration routes of this mammal are restored as much as possible with this initiative. For this, nature reserves such as the Nagarhole National Park, also known as Rajiv Gandhi National Park, are being created. The park covers an area of ​​more than 600 square kilometers. The local population is also taught to become aware that this is an endangered species.

Actor Hero Muller, the voice of Cookie Monster, passed away

Actor Hero Muller, the voice of Cookie Monster, passed away