The African and Asian elephant have some distinct differences. This makes it possible to easily distinguish these types from each other. The African elephant, for example, is a lot bigger. They have huge tusks and a larger body. As a result, they weigh more, so they need a greater amount of food to survive. However, they do have the same lifestyle; they are both social animals that sometimes travel long distances. Both elephant species can protect their young by living in herds. How big can both species get?

The two elephant species are very different from each other

The African and Asian elephant are both mammals and herbivores that live in herds. At first glance, these species are very similar. Elephant herds are usually led by the oldest female. The younger males will leave the herd at some point to form their own. Older males tend to live independently. However, there are numerous differences between the two different types. The Asian elephant is classified with five subspecies. One of these subspecies has become extinct. The Indian and Sumatran elephant are among others the best known of the four remaining species. The African elephants can be divided into seven subspecies. Of these, four species are extinct. The two species that still occur in Africa are the African bush elephant and the forest elephant. 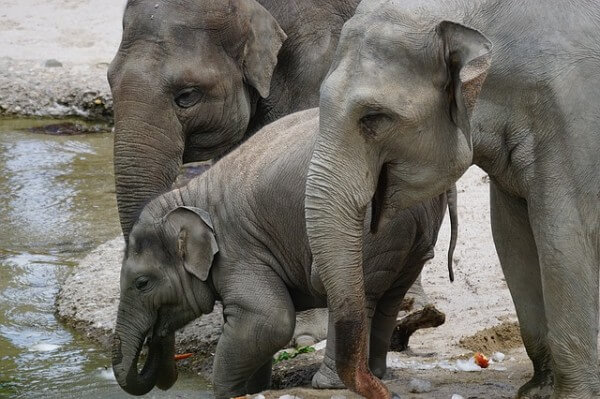 The dimensions and weight of the Asian elephant

The Asian elephant can reach a maximum length of 6 meters. It can also reach a height of just under 3 meters. Its maximum weight is approximately 6 tons.

The dimensions and weight of the African elephant

Other differences in appearance

The Asian species has smaller tusks and ears. His ears are closer to his head. These ears are smaller because it has less to deal with extreme dryness. The African elephant uses its ears to cool itself by moving firmly back and forth. In addition, they have only one lip, namely the lower lip. Its head is also lower (below its spine) compared to African species. The Asian variety’s trunk has only one protrusion. The African elephant has two. However, it does have more “lines” around its trunk. His skin is also much more wrinkled and tougher.

The African elephant eats a lot more than the Asian elephant because of its size. It eats about 300 kilograms of food per day, which is about twice as much as the Asian elephant. In addition, they have the ability to drink 200 liters of water in one day. The Asian variant needs a maximum of 160 liters of water. This is because it occurs in more humid areas. The African elephant can go without water for up to 4 days. It often happens that a long dry period starts. He digs with his tusks to find water sources to increase his chances of survival. In addition, the animals travel great distances to find water. The African and Asian elephant live in two different areas that are far from each other.

In which areas do these elephant species live?

African elephants are only found on the continent of Africa. Here they live on the savannah. It is a dry and vast area. Due to the drought there is little vegetation here. Asian elephants are found in India, Nepal and Thailand, among others. These areas contain dense jungles where these elephants feel at home. Both species migrate over great distances. During this migration they come into contact with other elephants. This animal species is known for the fact that they are social animals that often communicate with each other. This significantly increases their chances of survival.

Asian elephants are sometimes tamed and used as a means of transport or for entertainment purposes. A caregiver is also referred to as a ‘mahout’. Taming is often done in a cruel way. Fortunately, the local population is increasingly better educated in this. It explains how to deal with these mammals. In Thailand there is a shelter for elephants. These elephants are treated a lot better. Its African counterpart is too wild to be tamed. African elephants are more shy about people. In addition, these animals are a lot more powerful because of their size and therefore more difficult to control.

The spiders in the Netherlands: everything about the spider

The spiders in the Netherlands: everything about the spider