The griffon vulture is a scavenger that occurs in Africa and Europe, among others. It has a brown color and huge wings. In total, it can reach a weight of more than 10 kilos. It takes him almost two months to hatch an egg. He broods in a colony where there are dozens of congeners. The nests are often in a safe place. Where are these nest colonies usually found? Why do these birds of prey have such a huge beak and how do they get their food?

The bird of prey occurs in three continents, namely in Europe, Africa and Asia. This vulture species is most common in Western Asia. It is the least common in Africa, as it can only be found in the north of the continent. These are mainly desert areas where there is an extreme drought and which border the Mediterranean. They are usually found here in small colonies.

Islands in the Mediterranean

Sometimes the Egyptian vulture populates the various islands in the Mediterranean. The areas can be recolonized thanks to the wind that transports the birds from the interior of Spain and Greece, among others. Then they end up on the different islands.

Conservation measures for the species

Measures are taken to ensure that the species is preserved. This is done by using less (agricultural) poison. In addition, reducing livestock farming is a tactic that is used so that more habitat is available. 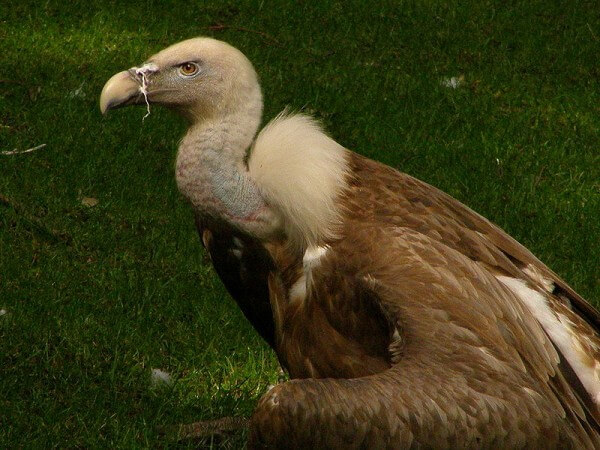 Griffon vultures generally have brown feathers. The brown color comes in different shades; the tips of its wings are darker in color than the front which may have a reddish glow. The colors can sometimes look faded. His neck is white in color and therefore stands out while his tail is small and black. Skin can be seen on some parts of the back of his neck and chest. His state of mind can be seen by the color of the skin. If the animal feels comfortable, the color is mainly white. In other cases, the skin will turn a blue to red color.

The griffon vulture is one of the largest birds of prey on earth. It can reach a maximum length of 110 centimeters and a wingspan of 2.80 meters. In addition, it can reach a total weight of 11 kilograms. Despite its size, this enormous bird of prey can reach a speed of 70 kilometers per hour.

Despite the fact that these birds belong to the birds of prey, they are scavengers. When the vultures see a weakened animal walking, they fly quietly in circles over the affected area until the victim breaks down due to drought or possible injury. They have a large beak with which they eat themselves on the carcass. These birds are also seen as ‘cleaners’ because in this way the bodies of dead animals are cleaned up.

This bird species normally lays only one egg every year. He usually does this in a nest that is high on a rock. It is very rare for this bird to nest in a tree because the Egyptian vulture mainly occurs in rocky environments where few (or no) trees occur. Incubation takes about 52 days. The offspring needs about six months to leave the nest.

Because the bird of prey breeds in colonies, the nests are in the same environment. However, the nests are at least two meters apart so that the parents have time to defend the nest. Kind members can raid the nest when there is a threat of food shortage. A colony usually contains 15 to 20 pairs. In some cases a colony can even grow to more than 100 pairs.

Causes of bald spots in a chicken

How much does a dog cost per year?

Causes of bald spots in a chicken

How much does a dog cost per year?