The Gryfino forest with its crooked trees

The Gryfino forest with its crooked trees

You can find a forest in northwestern Poland. With about 400 pine trees this could be a fairly normal forest, however not all trees grow up neatly. There are a number of these pine trees that have grown in an abnormal arch, which is why this forest is also known as the crooked forest. The big questions are; was this a natural response or is man responsible? Why haven’t all trees grown crooked? 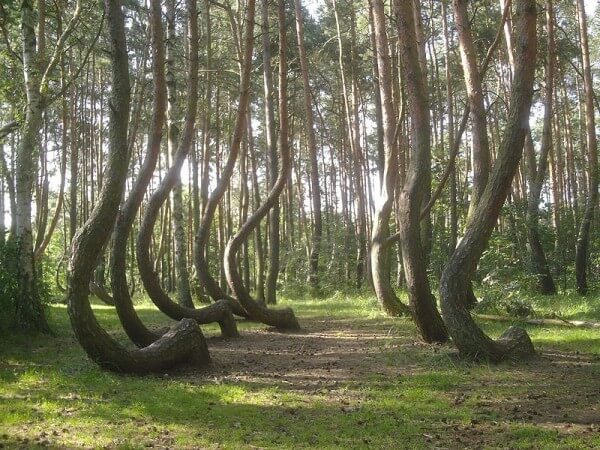 The town of Gryfino is located south of Sczecin by the river Regalica that flows into the Oder. Gryfino had about 21,584 inhabitants in 2005. The Gryfino forest with the crooked trees can be found next to this city and at first glance this looks like a normal forest. Until you take a closer look and see the abnormal growth of the trees. The trees grow crooked, but neatly all in the same way, although there are also trees that grow normally.

When the trees are planted

The trees of this crooked forest were probably planted around 1930, but many people doubt that it wasn’t 30 years later. For about seven to ten years they just grew straight up into the air, as we are used to from trees. The reason that they continued to grow skewed afterwards could be anything. In the village itself there are various theories about what may have happened to the trees, but no one is entirely sure.

Possible natural causes of the crooked trees in the Gryfino forest

Nature has a lot of influence on the growth of trees. For example, it can be a magnetic field, gravity, the wind or even snow can be a cause. These are just a few possible causes, given that nature still has many mysteries to mankind.

One possibility could be that there is a magnetic field underneath the leaning trees. This would cause the trees to soak up magnetic water, pulling the tops of the trees toward the ground. When this happens with young trees, it can cause them to grow crooked.

It may also have to do with gravity, which pulls the trees differently in this place. Even the strength of the wind can determine the direction of trees and plants, but the question is whether the wind has such strong developments in its reach. There is also the question of why the trees have continued to grow in a neat arc. However, this does not explain why not all trees have started to grow crooked.

It may have been a violent snowstorm, covering the entire forest with snow. This stunted the growth of the trees and after a long time of thawing, the trees only continued to grow again. The weight of the snow pressing on the roots for a long time can force the trees to grow crookedly. If it also remains frozen until early spring, it can strongly affect growth. Perhaps the snow would not have covered all the trees, so that trees could continue to grow straight. A curious fact remains that the leaning trees are very similar and you would rather expect them to grow in different directions with this effect.

Human causes of the crooked trees in the Gryfino forest

Man can exert his influence in various ways, this does not even have to be on purpose. Since trees can become very old, various events may have already taken place in the Gryfino forest. Consider, for example, the Second World War.

There are also claims that people did this inadvertently with tanks, even during World War II, with German tanks driving over the saplings in their haste to get to Berlin. Snow and mud could have kept the trees alive, after which they continued to grow in an arc.

A deliberate human interference with the growth of the trees could come from putting bags of sand on the young roots and removing the extra branches. Whoever did this must have known what he was doing. The trees can die quickly if this is done incorrectly. The purpose of this could be the production of wood for boats, among other things.

The harvest of the crooked trees

It could be that after the Second World War broke out, people simply forgot the manipulated trees. Failure to harvest the trees may also be because they were no longer allowed to be harvested when it became a national Polish forest. Whether the trees were actually planned in 1930 is also still quite debatable. Some people think that the trees were not planned until 1960 or 1980, because they don’t look that old yet. The possibility that they no longer harvested the trees because of the Second World War will of course no longer apply.

Looking for a care horse!