The pancake: originated and whether or not exotic variants

The pancake: originated and whether or not exotic variants

There is always room for pancakes. They are welcome guests at a children’s party, after a refreshing walk or on February 2. With just a few ingredients you can conjure up a tasty meal. Both young and old love it. It is not without reason that the pancake restaurants come out of the ground like mushrooms. You can easily fill an entire menu with it because you can eat them both salty and sweet. But there are many varieties of pancakes. There are also many different types of pancakes elsewhere in the world.

People do not agree very much about the origin of the pancake. There are several theories. According to one, the pancake was created a long time ago, when someone accidentally spilled some dough on the hot stones in the fireplace. Other sources say it originated in Roman times. The French word crepe would then be derived from the Latin crispus, which means curled. The dough does indeed curl a little when it bakes. In old French it would have become “cresp” and later crepe.

You have pancakes in all sizes and shapes. In the Netherlands, the poffertje is known in addition to the classic pancake. They are small pancakes that are baked in a special poffertjes pan. The trick is to turn the poffertjes all over with a fork as quickly as possible. Poffertjes have a diameter of three to four centimeters and are slightly thicker than the regular pancake. To achieve this effect, a little yeast is often added to the dough. Poffertjes are eaten with sweets. The classic is a knob of butter with icing sugar, but chocolate, jam or candy syrup can just as well be eaten with it.

A pancake is a thin pancake. It can be eaten with a savory or sweet filling.

Blinis are Russian pancakes. They are also smaller than the classic pancake. They have a diameter of about seven to eight centimeters and are made with buckwheat. Blinis are eaten with salt toppings. The pinnacle is a blini with caviar. Blinis are eaten at the Russian Pancake Festival, the Maslenitsa.

The pancake is the American version of our pancake. They are five to ten centimeters in diameter and about one to two centimeters thick. To achieve that thickness, a raising agent is added to the dough. Buttermilk is often used instead of milk. The pancake is often consumed for breakfast, with sweets. The classic is pancakes with maple syrup. Pancakes are also delicious with sour cream and blueberries.

In France there are crêpes and galettes. There are different theories about the different names. Some say the name differs from region to region. Others say it depends on the type of flower used. Crêpes would then be made from plain flour, galettes from buckwheat. Still others say that the galette is the dough biscuit alone, so the base of the crepe. In Brittany, the cake is baked on a hot plate, which is called billig. In Normandy that plate is called tuile. You can eat pancakes here at all times of the day and find both the salty and the salty variant. In Limousin people also bake a kind of pancakes that are called tourtou.

In many countries there are pancake festivals, usually in the months of February and March. Pancakes often symbolize the sun due to their round shape and their golden yellow color. They are eaten to celebrate the end of winter and the beginning of spring. It also used to be a way to get rid of eggs and butter before Lent started.

The last Friday of March is National Pancake Day in the Netherlands. On this day, attention is also paid to older people. Often pancakes are baked in retirement homes by school children or the pancakes baked at home are brought to older people. This day was created in 2007 by Koopmans and Tefal.

Candlemas is celebrated on February 2 in Catholic countries. In Flanders there is a proverb that says “no woman is so poor that she warms her up on 2 February”. In Mexico, tamales are eaten on February 2 to celebrate Candlemas.

Maslenitsa is the Russian pancake or butter festival, which is somewhat related to our Fat Tuesday or Carnival. It is celebrated in the last week before the Great Lent to wave goodbye to winter and to use up the eggs and butter reserves. A lot of blinis are consumed during the pancake party. At the end of the festivities, a large straw doll is burned as a symbol of winter. 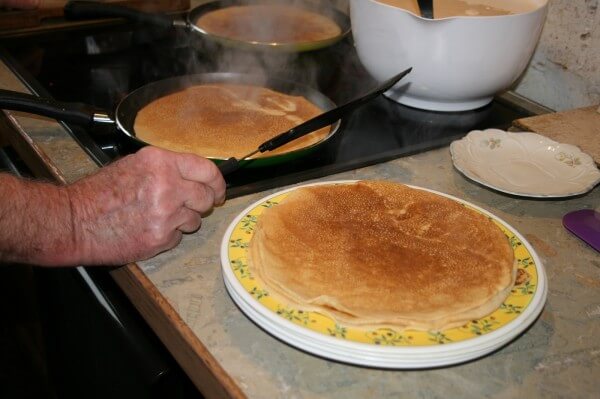 You don’t need much to make pancakes. Eggs, flour, milk and a pinch of salt are enough. To make them lighter you can add a little bit of sparkling water or a little beer. You can replace the regular flour with buckwheat flour. Some people also add some oil or butter. Still others a little bit of each. No yeast is used for our classic pancake. That is why they are so thin. Yeast is added for blinis and pancakes to give them more consistency. Furthermore, you also need one or two pans and a spatula to turn the pancakes. You can serve them immediately or you can make a whole stack in advance and reheat them one by one afterwards.

You can top your pancake with the following sweets:

To make the dough for your pancakes also salty, you can omit the sugar in the dough and add a pinch of salt. Invest with:

Addresses of pancake restaurants in Belgium and the Netherlands