In 2014 Heineken introduced a new beer tap for the home: The Sub. This beautifully designed beer tap should do better than the previous home tap: the BeerTender. To achieve this, Heineken has listened carefully to the consumer. The result is a hip device that, according to Heineken, wouldn’t look out of place in the living room. Heineken’s expectations are high, but will this home tap end better than the earlier BeerTender? 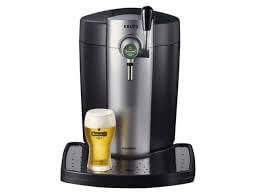 The forerunner of The Sub is the BeerTender. Unfortunately, sales were quite disappointing. Competitors’ home taps were also not really successful. Still, according to Heineken, it should be possible to tap into a new market with a new home tap. When designing The Sub, they first took a closer look at the old BeerTender.

In 2004 Heineken launched the BeerTender. Initially, Philips was going to make the device, but Heineken and Philips did not agree. Philips wanted every beer producer to be able to participate in the project. Any beer brewer would be allowed to offer suitable kegs against payment of a license fee. Heineken, however, wanted only beer from the Heineken concern to flow out of the BeerTender. Ultimately, the collaboration between Heineken and Philips ended. Heineken then entered into a partnership with Krups.

The first Heineken beer tap for home use was the BeerTender. A nice device, but a bit unwieldy. Due to its size, the beer dispenser often just did not fit under the kitchen cupboards. The “men’s solution” to give the beer tap a place in the living room, however, was not appreciated by many ladies. As a result, the beer tap was banished to the attic and only reappeared at parties. This was not the idea that Heineken had in mind with the home tap. The successor therefore had to be smaller and more beautiful.

Another point of criticism was the content of the kegs (four liters). While for some enthusiasts the kegs couldn’t be big enough, most tap owners thought the kegs were a bit too big. The tap was often not used on weekdays – it is not always a party – so it took (too) long before a keg was empty. If one wanted to try a different beer, the “old” keg had to be empty first. Heineken also remembered this criticism well when a new home tap had to be designed. 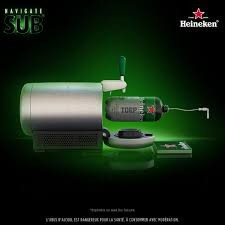 Heineken is taking a considerable risk with the introduction of a new home tap. To increase the chance of success, considerable costs must be incurred. Nevertheless, it has been decided to take the plunge. The home tap will be different than it has ever been. Hipper, nicer, but not cheaper.

Design by The Sub

The new home tap must be able to find a place in the kitchen and should therefore not be too high. This has been well taken into account in the design. The Sub is not high, but rather elongated in shape. Kitchen cupboards are no longer an obstacle. After the kitchen, the new beer dispenser also had to conquer a place in the living room. To achieve this, a well-known, expensive designer was hired: Marc Newson. This Australian designer has many beautiful designs to his name and has worked for Samsonite, Apple and Pentax, among others. The Sub, like the BeerTender, is made by Krups.

Kegs for The Sub

The Sub is hip. Kegs are therefore not just called “kegs”, but “Torps”. The content of these “Torps” comes from Heineken or a brewer from the Heineken group. This means that still not every brand of beer can come from the tap, but the choice is still quite wide. All Torps have a volume of two liters. The Torps are first cooled in the refrigerator and then cooled even further in the Sub itself. To keep it all a bit exclusive, the Torps are only available from a few supermarket chains. In addition, the Torps can also be ordered online.

Many beer lovers prefer a slightly colder beer. This is also well understood at Heineken. The Sub cools the beer to 2 degrees. That is (slightly) colder than the BeerTender and the other home taps. It does take a while for the beer to reach this low temperature. If you let The Sub cool the Torp all by itself, it can easily take ten hours for the beer to reach 2 degrees. Even if you “pre-cool” the Torps in the refrigerator for a few hours, The Sub will still have to cool for a few more hours. Unfortunately, this makes the Sub not suitable for a party.

For such a hip device you have to be prepared. The beer in the Torps is about 1.5 times more expensive than bottled beer. In addition, the Sub is actually a kind of small refrigerator that will use the necessary power. The question is therefore whether the consumer is willing to pay this additional price. On the other hand: Nespresso also succeeded in getting the customer to drink expensive coffee.