‘Whales big and fat’ is the main title of an anthology of texts about Dutch whaling. The subtitle of the book is ‘The Dutch on whaling in the High North.’ The reader takes a journey through time, in which the compilers Beelen and Biesheuvel translated old and sometimes difficult to read texts into modern Dutch and provided an introduction. It starts with Jonas and the big fish, which means the whale, and ends in the nineteenth century, when the grave of an eighteenth-century whaler is found on Spitsbergen, made visible by the melting glaciers. The book is a must for lovers of true stories and history of whaling.

Dutch whaling in its heyday

Jonah and the whale

The Dutch were successful whalers in the seventeenth, eighteenth and to a lesser extent in the nineteenth century. It provided raw materials such as fat, tear and whalebones from which various other products were made. Lamps burned on the oil, whale oil became the raw material for soap and candles and corsets and umbrellas were made with whalebones. The trips mainly went north, to Spitsbergen, Greenland and Davis Strait. The more the seas were fished, the farther the wooden sailing ships went. The book covers a period that begins with the story of Jonah and the whale. The source of that story is a medieval text.

Stranding of a whale

It was the time of the slow mail and the absence of smartphones and social media. Even without a camera. If a whale washed up somewhere along the coast, a drawing or engraving was made. It was not uncommon for the imagination to run wild with the artist and the animal to appear like a sea monster. The book contains many images that give a nice picture of the sea colossi, the ships and the crews.

The compilers of the book collected a whole series of authentic sources on whale strandings, whaling and the whalers. As an example: ‘The wonderful history of the Nordic countries’, written down by the Swedish church official Olaus Magnus and published in Antwerp in 1562. Olaus Magnus writes, among other things, ‘About the gruesome sea monsters around the coasts of Norway’ and ‘About the battle between the whale and the orca’ and ‘About anchors that are cast on the back of the whales’. Centuries ago, adventures of hunting in the cold waters, far from home, have been included in this book. Sailors tell stories about the difficult life on board, commanders describe disasters and successes and the correspondence with the home front is also a source. 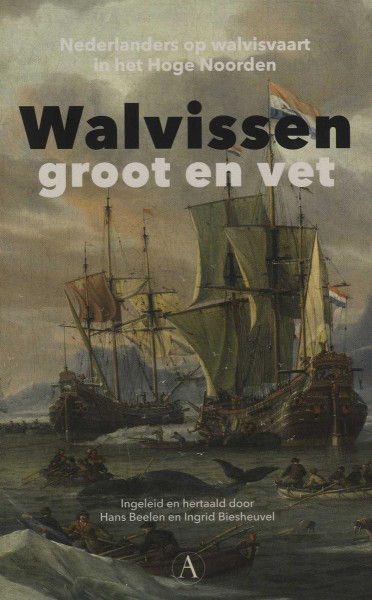 Biesheuvel and Beelen surfaced in archives and in depth a large number of texts about whales and Dutch whaling. They selected the most striking and where the language is old and difficult to read and understand for the reader in the twenty-first century, they redesigned it in contemporary Dutch without altering the atmosphere of the original text. They show what whale and whaling have meant for the Dutch economy, science and culture.

About whaling and hardship

The lyrics are about the animals, the sailors, the ships, the technique of whaling and the hardships. You can read what went on board with it, when the whaler went out for a month-long voyage. It’s about overfishing, bacon cutting, shipwrecks, about burying the dead in the ice and about safe homecoming with big booty. Moby Dick is featured and also the hardships that the men have to endure due to freezing of limbs. When you read what the men are going through and take into account that in small boats on icy waters they have chased the largest creatures in the sea, it makes you shudder. The true adventures are more exciting than you can imagine.

On page 210 is a moving document. It is a letter from Commander Hidde Dirks Kat to his wife on Ameland. The writing begins with? Dearest Jantje Jans ?? and ends with “Say hello to Father, Mother, Sister and other good friends from me. Greetings from me too, your husband who loves you, may the Lord keep you. Give my lovely children a big kiss from me! ??

Interestingly enough, it is not the Diary that Hidde Dirks Kat wrote about his shipwreck and stay with the Inuit that is the source of this passage, but a story that another Amelander commander, Marten Jansen, wrote about his adventures with the ship Het Witte Paard. Just like the Juvfrouw Klara van Kat and eight other ships, it crashed in the waters under Greenland in 1777. Kat wrote the letter in February 1778 and it did not arrive on Ameland until the summer of that year. All this time Jantje lived in uncertainty whether her husband was still alive. In our time of mobile communications and satellite telephones, this is hard to imagine.

The book is richly illustrated with black and white images. In the center is a full-color quire, illustrations of sea monsters that look like wild boars with huge fountains on their heads and gnome-like whalers trying to shake off the monsters by throwing wooden barrels at them. There are also maps of Greenland and the Arctic Seas. It can be seen how the maps become more detailed over the centuries. The color section also gives a good idea of ​​the nutshells that were the whalers and of the catchers that were as big as the whale’s tail wide.

Whaling in the museum

The last chapter of the Dutch whaling industry, the one after World War II with the Willem Barendsz, is not discussed in this book. The adventures in ‘Whales big and fat’ end in the nineteenth century. Several books have been written about the more recent Dutch whaling, which did not go to the northern waters but to the seas around the South Pole. Biesheuvel and Beelen include a list of interesting works on recent and early whaling in the book. Museums, which focus on whaling, are also listed. Museum Sorgdrager in Hollum on Ameland is included, as is Museum ‘t Beouden Huys, which can be found in West on Terschelling. Harlingen, Amsterdam, Texel, Rotterdam, De Rijp and Zaandam have museums with a whale department.

Hans Beelen (1960) is a Dutch teacher. He is affiliated with the Universität Oldenburg, a city in Germany between Nieuweschans and Bremen. He has a special interest in whaling from the sixteenth to the nineteenth century and, as leader of the Dutch Language Voluntary Network Foundation, coordinated as many as 40 editions on whaling of that period.

Ingrid Biesheuvel (1951) is medievalist and translated various literary texts from Middle Dutch, opening them up to a large audience. In 2012 she received the Gerrit Komrij Prize for her translations of knightly novels. She often collaborates with other authors and specialists. In Hans Beelen she found the whaling specialist. In 2011 she translated the seventeenth-century maritime dictionary Seeman together with him and Nicoline van der Sijs.

The title ‘Whales big and fat’ is part of a song text from the eighteenth century. It comes from a collection of song lyrics about shipping. The whole excerpt is as follows:

One can find here on Spitsbergen
foxes and bears cruel,
mountains that provoke heaven,
ice floes thick and wide,
whales big and fat at will,
many land and sea monsters
but not one living person.

For anyone who loves true stories and is interested in the whaling industry that brought so much prosperity to parts of the Netherlands, this is a book to feast on. You get to know many different elements of whaling, where interesting information is alternated with bizarre anecdotes. The whalers at that time about which this book relates experienced many special things. That sticks after reading the book. The men worked under extremely difficult conditions without survival suits, but wearing trousers and jackets made of cotton, linen and wool and wool knitted hats or fur hats. Herman Melville’s book Moby Dick is teeming with data on whaling, embedded in an exciting history of the white whale hunt. ‘Whales big and fat’ provides insight into the development of whaling and leaves you as a reader in awe. The book is a must for any nautical history lover and a delightful addition to Moby Dick.

Whales big and fat – Dutch whaling in the High North

Used car sales advisor: what can the Porsche Cayenne 9PA do?

Used car sales advisor: what can the Porsche Cayenne 9PA do?