Young people are busy developing their identity. They struggle with questions such as: ‘who am I?’, ‘What can I do?’ and ‘what do I want?’ In different environmental systems in which they participate, such as family, school, group of friends, club, they are expected to demonstrate appropriate role behavior. Because each system has its own role expectations, young people may have to deal with opposite roles. This can confuse them, which can lead to aggressiveness, withdrawal, inferiority, depression, among other things. If they also cannot meet the ideal images that the environment desires, then they can also try to shape their identity in a different way. This can be done, for example, by seeking affiliation with radical groups or peers who focus on drugs, alcohol or sex. Counseling young people with identity problems requires specific conversation skills and techniques.

And everyone works throughout their life to develop their identity. Identity has to do with three questions: (1)

How do I experience myself? What do the others expect and think of me? Do I stay the same even though I change over time?

What capabilities do I have? Do others appreciate them? Do they expect me to do or be able to do more?

What do I want?

These questions arise, unconsciously or consciously, especially among young people between the ages of 10 and 22. Answers depend very much on how the environment reacts. Everyone, young and old, has to deal with role expectations that are seen as appropriate in environmental systems such as family, family, school, work, neighborhood, association, etc. The older one is, the more certain one is how one can meet different role expectations. Characteristic then is one sense of continuity.(2) This is not yet the case with young people. They are still searching, experimenting, how to fulfill role expectations. There is often no sense of continuity. To disguise insecurity, they can behave indifferent, rebellious or withdrawn. The environment, but also the young person himself, can experience such behavior as problematic. 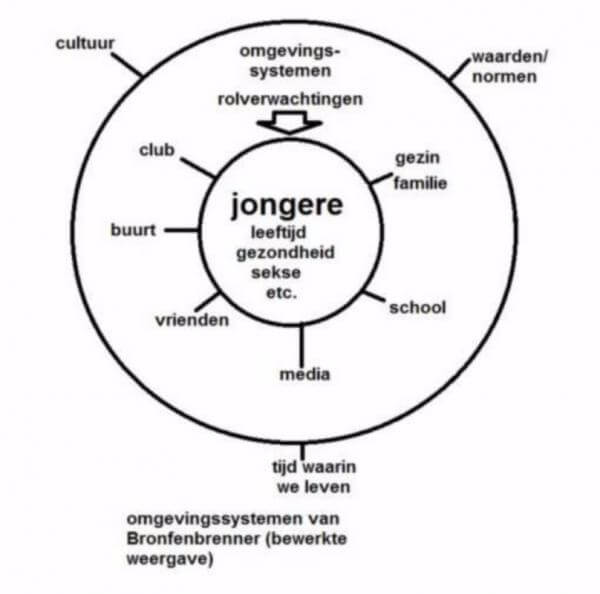 Coming from the schoolchildhood, young people have to find their own way to adulthood. Maturity requires stable, continuous behavior. Because roles in the different systems can be opposite, role confusion can occur among young people: when do I play which role and how? E.g. the family demands a docile role, while the school encourages initiative and empowerment. Or in the group of friends and club, the young person has to be more fierce and more aggressive to maintain himself. The young person may confuse the roles. At home and at school, for example, there is a fierce and aggressive reaction, which is not accepted there.

An example with different role expectations in environmental systems that a young person may have to deal with:

The family is characterized by a hierarchical structure. What the parent says must be done. Contradiction is not accepted.

The school is characterized by self-development. The young person is asked to take a lot of initiative and to work independently. Group meetings where every opinion counts is appreciated.

The group of friends goes to the disco and café. Quite a few alcoholic drinks are consumed, with jokes, sometimes with some prickly comments, being made about each other. To belong, one must participate.

The sports club asks for behavior to keep each other in the team on their toes. People do not shy away from telling each other the truth when mistakes are made. To belong, you should not hesitate to tell the other person the truth.

The more the roles are opposite, the greater the confusion can be in the young person. If, on the other hand, the roles are more similar and in line with each other, young people will sooner experience a sense of continuity and show more stable behavior.

If the young person has problems in the psychological structure, whether or not caused by brain abnormalities, strong hormone influences or environmental influences, then role confusion can increase even more. This concerns, for example, young people with ADD, autistic spectrum disorder, aggressive behavior, inferiority, depressive predisposition, etc. Requirements placed on these young people by the systems may be too much to ask. If young people cannot meet the requirements, they cannot find adequate answers to the three identity questions that cause them self image even more affected. With these problems they can experience that the environment perceives them as difficult. The school or “friends” group may even exclude them. Bullying behavior can be the result. This increases uncertainty. (4)

Young people who experience a serious degree of role confusion and are unable or unwilling to meet the demands of parents, school or social standards may develop the following forms of identity: (5)

The young person seeks affiliation with groups that are hostile to other groups. For example, ideological groups with extremely nationalistic or violent ideas such as street gangs or certain religious sects can occur. Radicalized young Muslims who join IS can also be counted among them. Belonging to such a group helps them find answers to the questions of identity. It gives a sense of security.

The assumption of this identity is often the result of a reaction to the continuous inability to fulfill the roles that fit an ideal image created by the environment. For example, if a young person is constantly told that he or she does not meet the strict standards of school, religion, drugs or sexuality, he may consciously or unconsciously lapse into undesirable, deviant behavior and renounce the belief or become addicted. A role is then assumed that offers more security and satisfaction than fighting against the unfeasible ideal of the environment. Seeking and connecting with like-minded people may provide that certainty.

Helping young people with identity questions and role problems is not easy for people in the immediate vicinity, such as parents or carers. There are some general guidelines Be given. In many – not all – cases, these guidelines can help create a meaningful helping conversation.

Young people love it not nice to be directly questioned by adults (parents, teachers) about matters that are rather personal or intimate. Questions such as: ‘Are you not feeling well?’, ‘How do you feel?’, ‘What do you want?’, ‘Who are you?’ etc. are often too direct and can evoke resistance. It is better to address the problem first to be worded generally whereby recognition takes place.

The young person must first get the feeling that his problems are more common. There is then recognition. If this is worded correctly, the young person can join in. Subsequently, it is possible to zoom in more on the specific problems of the young person. Then his / her problem is recognized. If the young person does not hook up, something more specific can be asked. Supervisors at school are – if all goes well – trained in conversation forms and skills as extensively described by Van der Wal et al. (6) If the problem is clear, then there is a danger moralize like ‘what you went through, I also experienced once and I solved it like this’ or ‘I think you should do this and that’. It is more likely to let the young person indicate how they think they can tackle the problem. Reflective questions can be asked such as: ‘You think your idea is feasible?’, ‘How do you think it will be realized?’ etc. (7)

The facilitator helps in this by clarifying the approach proposed by the young people by discussing concrete options and working out together.

Expert guidance is recommended for young people who have already developed an artificial or negative identity. Presence of drug use or radicalization cannot be resolved with a few conversations. An approach by specialized authorities, if or not imposed by the courts, is more promising.

Get two rabbits used to each other

Get two rabbits used to each other